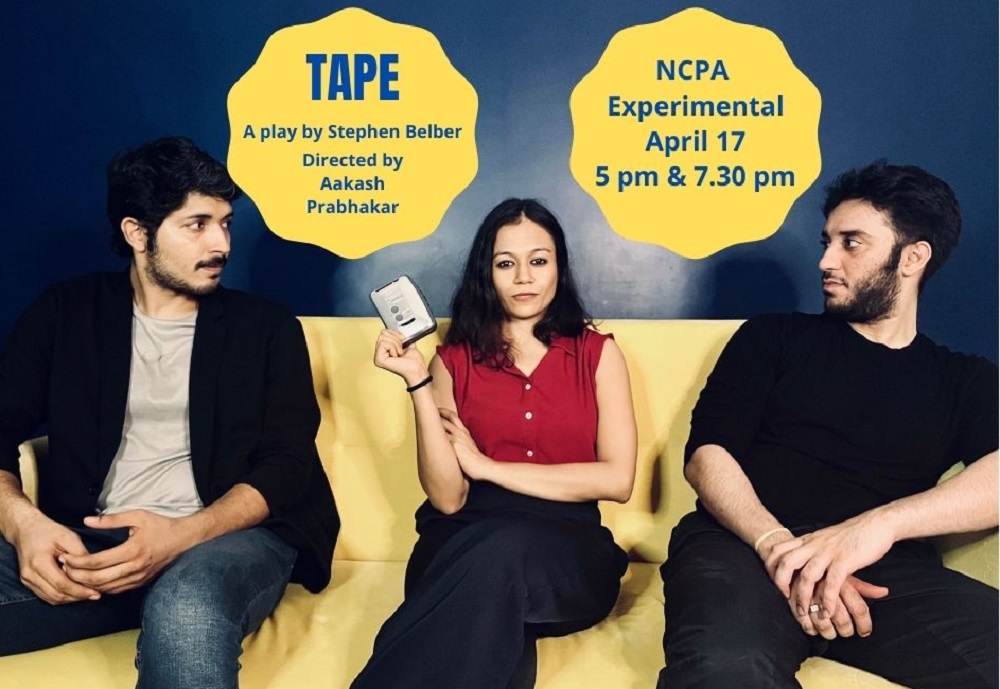 ‘Tape’ just premiered in India, and the audiences seem to be enjoying the storyline that strikes a resonance with urban India today.

The play that follows a classical unity of action, time and space, featuring three characters in a single plot regarding their differing perspectives of some past events. Tape has been adapted by actor, writer, filmmaker Aakash Prabhakar.

Read: From Chai to Ghalib – Bridgerton’s Indian portrayal both a hit and a miss (April 7, 2022)

Prabhakar recently made his directing and acting debut with his film ‘Freddie’s Piano’, which went on to be screened at 20+ international film festivals and is currently streaming on Neestream.

He has also acted in a number of short films like ‘The Long Drive’ with Sheeba Chaddha, ‘The Connection’, and ‘Shut up’ currently streaming on Quint.

He talks to the American Bazaar about ‘Tape’ and why the American storyline works as seamlessly in India too.

AB: Tell us about the play, ‘Tape’ and your role in it?

AP: It’s a play written in the late nineties by Steven Belber. It was later made into a movie called ‘Tape’ directed by Richard Linkletter.

It’s a play where two high school friends reunite after ten years, and they discuss a possible history where one person thinks the other person has been inappropriate with somebody they both dated back in high school.

There are a lot of allegations. It goes back and forth, but it’s discussing a possible sexual misconduct, and this classic idea of, wait what happened that night?

Let’s put down facts and really understand. Was it breaching of consent? Was it rape? Was it a day trip? What was it? And then at some point, the third character, who they discussed, comes in. All three discuss what happened that night.

I play Vince, the guy who’s trying to fish information out of John, who he thinks has raped his high school girlfriend on a drunken night.

AB: What is your process of getting into a role – like how do you start?

AP: I think it starts with just reading it as many times as you can so that you understand where the character is coming from.

So for Vince, the more I read, I realized that a lot of it is just jealousy of how he could not be with Amy, his high school girlfriend, or be intimate with her. And he realizes that his best friend John was.

I understood the place where Vince is coming from. Why is he acting like how he is? And a lot of how we are today is shaped by how we were as teenagers and how we were as kids.

So the first start for me is to not judge the character and just read as many times as I can and understand the finer nuances of why this character is doing what he wants to do.

And how is he doing it? Very simple questions as we ask that we ask when we read the script. And I also try to build a backstory of what happened to this guy or who was this guy before the play?

So I build it up on the basis of what the text tells me, the script tells me, and I use that to get into the process of the role.

AB: What is your favourite part about being on the stage?

AP: I think it is to just be present. Just the fact that at that particular moment, these 200 people who’ve come in, they’re all here with you, present, not thinking of anything else, and are listening to a story is the most powerful bit.

The fact that you can just take an audience member in Colaba or in Bandra to a random state in Michigan or a random house in New York and tell a story that belongs there, but make them listen to you here, and yet reconnect and empathize with these characters is beautiful and I think that’s my favorite part of being on stage.

AB: What has been your favourite play so far and why?

AP: Obviously there are these classics. Romeo and Juliet is one of my favourite plays because I try to read as much as I can to understand and figure out what would be my next production.

I keep reading as much as I can, but I think so far the way it’s written, ‘Cock’ definitely is one of my favorite plays by Mike Bartlett and so is ‘Visiting Mr. Green’ by Jeff Barron.

And as I keep reading something new now suddenly I think, wow, Tape is also so well written. So it’s an evolving process and one favorite always stops the other while that still remains to be a favorite and it keeps going.

But at this point in time, I think ‘Cock’, ‘Visiting Mr. Green’ and ‘Tape’ would sort of go up in the list.

I think I really like it because it taps into understanding finer human emotions and they vocalize it very well without being preachy.

All these three plays and human beings that these three writers, these three plays have are very relatable and understandable and you can easily empathize with these guys. So I think any play that I read and I start feeling for the characters will obviously be one of my favorites.

Read: Working with Jimmy Kimmel is the honor of a lifetime: Maureen Bharoocha (November 25, 2021)

AB: How do you regard the Mumbai theatre scene?

AP: Well, in the last two, three years it was too hard to regard anything because there was barely any theater happening.

There was lockdown, there was pandemic, and occasionally when something would open up, we would perform. If it doesn’t, we would just wait for it to open and go to another city.

There might be people who do a play because they want to do a film later. But whoever I worked with or the drama school people that I’ve met or the place where I went to study and in general, a lot of people in Bombay I see are very honest and they like telling good plays, they like writing good stories, they like performing plays and they don’t do it for the sake of it.

Also, it might probably be the only city where there are full time actors who do theater and other things, theater and film and theater.

Whereas, in other cities it’s a bank job and theater or accountant job, which is not bad, which is not wrong, but probably it’s the only city that you can sort of choose to stay in if you want to do this for a living.

The venues keep changing, the new venues keep popping, old venues keep stopping and shutting. But I like the vibrance, the earnestness and the honesty, the city offers to theatre makers and theatre goers

So vibrant is what I would say. It wasn’t for the longest time for the last two years. It is starting to get there again and I’m very happy about that.

AB: What should the audience expect from this play?

AP: I think audiences should expect a story that is going to unfold. As you see, there is no oh! this happened so maybe this would happen.

It unfolds as you go along in every 20 – 20 minutes and they can expect being super hooked and being thrilled and being all curious about what’s going to happen next and a great evening of conversations that they will have when they go back home. So, yeah, that’s what they could expect.

AB: Why did you think of an American adaptation?

And I think theater does give you the opportunity to explore that space. But you are looking at it here and then you’re thinking how it is so similar to what’s happening with you.

And hence, I think it works the way it is. However, it is working when you perform it the way it’s written. And I do think this is easy. Extremely universal.

AB: Were there any uniquely American adjectives that you had to Indianize or bring closer to culture?

AP: What we Indianized personally were references which are very specific to that time as opposed to the place. So for example, if the reference is an American celebrity who’s popular in the 80s that these two actors talk about on stage.

We referenced it to a celebrity who was popular in 2000 and 2010. But we didn’t really Indianize anything else because the target for us was simple.

We were actually planning to just begin the play by taking it to spaces in tier one cities as opposed to taking into tier two and tier three and plus NCPA (National Centre for the Performing Arts) and Prithvi all these stages.

The last time we performed, the English play just worked the way it was. Hence we just chose to keep it the way it is.