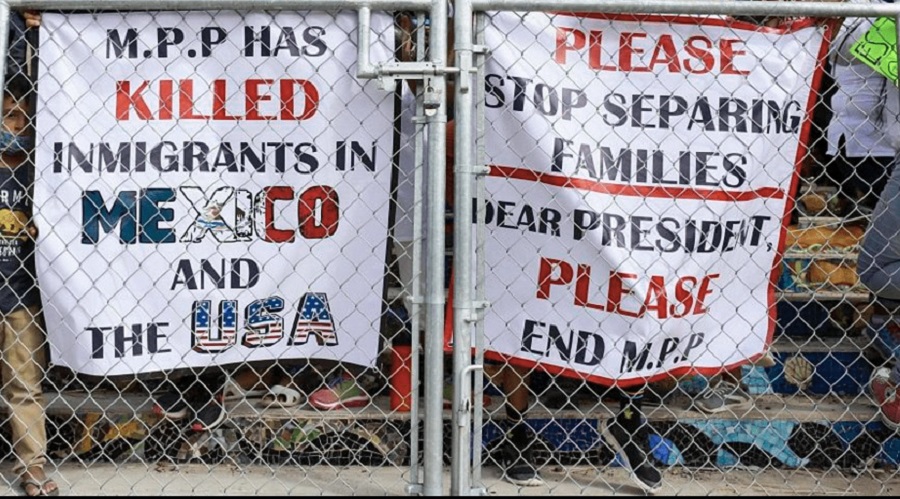 Hundreds of immigration advocates rallied on the steps of the Supreme Court Tuesday ahead of oral arguments on Biden v. Texas, a case on whether the Biden Administration can end the Trump-era ‘Remain in Mexico’ program.

The case asks the Supreme Court to consider whether the Department of Homeland Security (DHS) must continue enforcing the program that forces asylum-seekers to wait in Mexico for decisions in their US immigration cases. Texas and Missouri have challenged DHS’ Oct 29, 2021 decision terminating the program.

“Today, we are here to hold the Supreme Court accountable to the will of the people,” said Tami Goodlette, Director of Litigation at RAICES, a non-profit promoting free and low-cost legal services to underserved immigrants.

“The Biden v. Texas case is a critical juncture for our democracy, as the Supreme Court will decide whether the states of Texas and Missouri can undermine our laws and the will of millions of voters.”

‘The Supreme Court must reject the lower court’s decision and ensure President Biden and future administrations have the autonomy to implement their own policies, and that the harm imposed on migrants seeking safety in our country from the cruel and immoral ‘Remain in Mexico’ policy comes to a final end.”

Goodlette added, “Our laws are crystal clear: Everyone who arrives at our border has the right to request asylum and a person who fears persecution cannot be sent to a place where they are in danger. When people cross borders, their human rights come with them. The Supreme Court must allow President Biden to end ‘Remain in Mexico’ once and for all.”

When the US Supreme Court heard the arguments on Tuesday morning, on whether the Biden administration can scrap the Trump-era policy, the lawyers questioned whether the executive branch has the sole authority to set US immigration policies.

The Biden administration argued it has the discretion to end the program and that it was not an effective way to deal with migrants seeking asylum.

US Solicitor General Elizabeth Prelogar argued that Congress has allocated enough money to pay for just over 30,000 beds for migrants detained at the border, which isn’t enough for the thousands more who come to the US-Mexico border every month.

Allen Morris, Policy & Government Affairs Strategist at RAICES said, “Trump’s ‘Remain in Mexico’ policy was designed to inflict the highest level of suffering on families and children for choosing to seek safety in the US, especially Black migrants.”

“The policy was implemented during an influx of Haitian and Black migrants coming to the US border, who were then subject to additional abuse, racism, and displacement in an unknown country.”

“Black asylum seekers face rampant racism in Mexico and they are more likely to be denied asylum. Instead of providing care and safety for migrants, the US is actively choosing to create an environment of rampant danger and abuse where vulnerable people are at an increased risk of violence and exploitation.

“It’s poignant and telling that the US has issued travel warnings and restrictions for the same cities where they are dumping migrants under ‘Remain in Mexico.’ These cycles of suffering have been going on far too long. The Supreme Court must overturn the lower court’s decision and put an end to this racist Trump-era policy.”