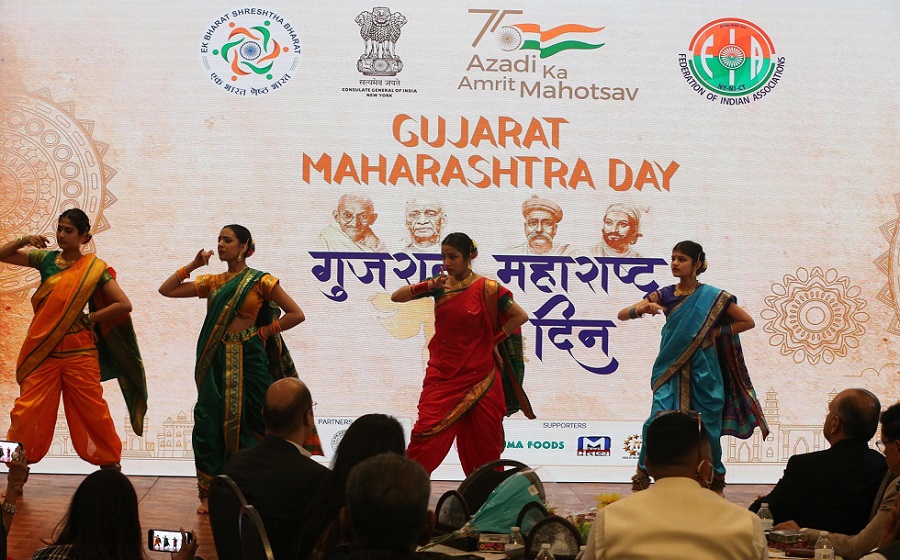 The Federation of Indian Associations and the Indian Consulate in New York celebrated Gujarat Maharashtra Day on May 1 as part of ‘Azadi Ka Amrit Mahotsav’ celebrations commemorating 75 years of Indian Independence.

The event was attended among others by Sam Joshi, Mayor of Edison, Archana Joglekar, a celebrated actress, director and a renowned Kathak exponent, and Kaajal Oza Vaidya, a noted author, scriptwriter, radio jockey, and a motivational speaker.

Welcoming the guests Consul General Randhir Jaswal said that the Indian Diaspora from both Gujarat and Maharashtra states, not only in America but in other countries as well, continues to contribute towards the economic and social progress of the countries they live in.

Deputy Consul General Dr. Varun Jep, said that people from the two states are leaders in finance, business, entrepreneurship and they also stand out for their rich cultural traditions and heritage.

FIA president Kenny Desai said that people from both states have contributed to the economic, industrial and financial growth of India.

FIA chairman Ankur Vaidya said that he was born and brought up in Baroda in Gujarat which had a significant Maharashtrian Influence and as such had the best of both cultures.

He also emphasized the need to engage other Indian communities and have events and gatherings where all the members from the various Indian communities can participate. He commended Jaiswal for doing a tremendous job in this direction to bring the communities together.

One minute silence was observed in the memory of founding member, past president and vice chairman emeritus Yashpal Soi. Vaidya remembered him for his selfless service and dedication to the cause of FIA.

Kajal Oza Vaidya said that both the states should be seen in unison and commended the fact that the twin states took to the path of progress and development and have excelled in the fields of enterprise, culture, commerce, and entertainment.

Sam Joshi Mayor of Edison spoke about his vision to have a satellite office of the Indian Institute of Technology (IIT) in Edison. He thanked the FIA for their initiatives which go a long way in keeping the Indian community in touch with their Indian roots.

An absolutely packed house enjoyed cultural performances from both the states and especially the ‘Garba’ and ‘Laavni’. Maharashtrian folk dance was performed by the students of ‘Archana Nritalya’ which is run by Guru Archana Joglekar.