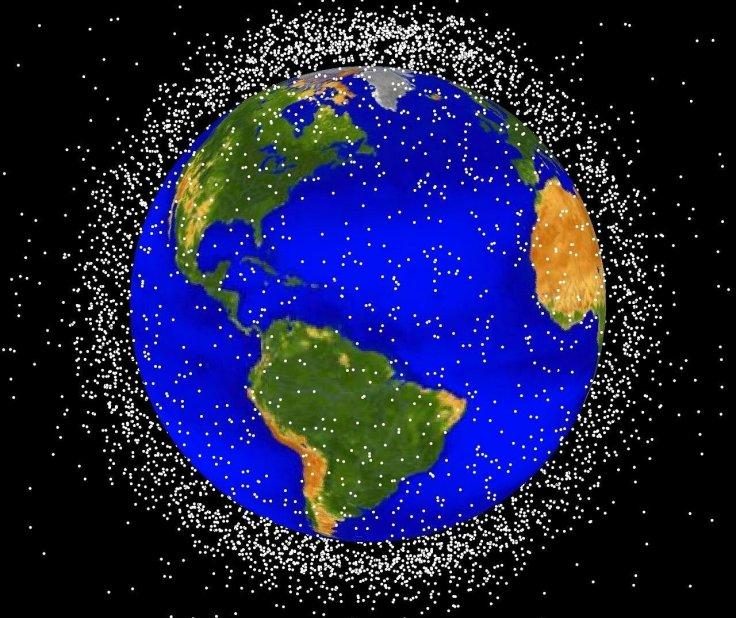 Amid China’s allegations of imposing a new space regime and restricting Beijing and Moscow from mining moon in the future, the US space agency NASA has announced a unilateral move to address the ever-growing space junk crisis.

NASA scientist Bhavya Lal of NASA’s Office of Technology, Policy, and Strategy (OTPS) has announced three studies to research and analyze orbital debris, bringing the issue of space junk back to center-stage among the nations vying for a slot in space.

“These awards will fund research to help us understand the dynamics of the orbital environment and show how we can develop policies to limit debris creation and mitigate the impact of existing debris,” she said.

An estimated 500,000 pieces of debris are believed to be circling Earth, posing danger to newly launched spacecrafts, astronauts and satellites. Occasionally, the International Space Station had to shift its orbits to avoid space debris.

According to the European Space Agency, over 170 million pieces of space junk are actually moving around Earth at rapid speeds of tens of thousands of miles per hour.

As per an estimate compiled a couple of years ago, this orbital debris moves dangerously at a speed which is 10 times faster than that of a bullet. Before crashing down on Earth, just one collision in space could form thousands of pieces of this high-speed junk.

“This debris can stay up there for hundreds of years,” Bill Ailor, an aerospace engineer who works for the nonprofit Aerospace Corporation told Business Insider.

“Countries have learned over the years that when they create debris, it presents a risk to their own systems just as it does for everybody else,” said Ailor.

Another publication, Space-Track.org, came up with a chart of the countries with the most amount of space junk around the globe as of October 2017, which showed the United States and Russia are the main culprits, followed by China.

Out of 6,500 objects found so far, 3,999 pieces of trackable space garbage in the orbit of Earth were created by American activities, followed by Russia’s 3,961 pieces of detectable space trash.

Though new in the field of the space program, China has already closed the gap with 3,475 pieces of space junk, especially after it destroyed one of its own satellites during an anti-satellite weapons test in 2007.

This highly controversial move had instantly kicked out over 2,300 trackable pieces of space junk into the orbit of Earth. Similarly, the collision of Russian Iridium 33 and Kosmos 2251 satellites created a huge amount of debris earlier.

Read: Is outer space turning into a battlefield? (September 8, 2022)

Developing space debris destroyers
Now that several space agencies across the world are gearing up to develop spacecrafts with a system that can remove the space debris, Aerospace Corporation, funded by the US Government with a development center in El Segundo, California, has developed a “Brane Craft” to wipe off Space junk by wrapping orbiting debris and drag it back to the Earth’s atmosphere while burning it.

The craft would be a yard wide, flexible and less than half the thickness of human hair. “It has to be bullet-proof because a 5-micron diameter particle can penetrate the main structural sheet, which is only 10 microns thick,” said Siegfried Janson, principal investigator and senior scientist at Aerospace Corporation in an interview to Space.com. The company plans to send several Brane crafts to burn the junk while returning to the Earth’s atmosphere.

A Japanese company, Astroscale, has plans to develop a spacecraft that will help to remove space debris from the earth’s orbit, named as ELSA-d.

“ELSA-d is an incredibly complex satellite as we will be demonstrating rendezvous and proximity operations technologies that have never before been tested in space,” said Seita Iizuka, Project Manager for the mission revealed two years ago.

Even the University of Surrey’s Remove DEBRIS project in the United Kingdom is planning a similar craft aimed to remove debris from the atmosphere. With SpaceX and a host of other space agencies planning to send tens of thousands of satellites in the next one year, cleaning space junk takes center-stage than ever.

Moriba Jah from the University of Texas, who specializes in monitoring orbital debris, has developed an online graph that keeps track of the near-collisions of space debris and active satellites orbiting Earth in real-time.

Known as the Conjunction Streaming Service Demo, using data collected by the US Air Force, the graph shows the distance between the objects in kilometers while the X-axis measures the time. Within the graph are color-coded dots that represent the objects hovering around Earth.

The red dots represent the orbital debris while the green ones are the satellites that are still operational. The yellow dots show both satellites and space debris. Lines and arcs connecting the dots indicate their movements and proximity from one another. The graph’s time-tracking feature enables monitoring near-collisions at almost every minute.

“Things are criss-crossing each other at very high speeds,” Jah told The Verge. “These things are traveling really, really fast and definitely coming close to each other. People need to be aware of that.”

Currently, there are over two million differently sized space debris pieces orbiting Earth and 2,000 operational satellites. According to Jah, if nothing is done to solve the current space junk problem or if regulations regarding satellite operations are not established, the space around Earth will become overpopulated and very dangerous.

“So the bottom line is that there is definitely an increased risk of collision with that increased traffic coming close to each other.”

The need for a “Space Law” unfolds in this context and so is the new “Space Cold War.”