President Joe Biden has lauded the Asian American Unity Coalition (AAUC) for using the power of civic engagement to exert its clout and influence as part of its march toward political empowerment.

By “educating your members about the power of civic engagement, you are helping bring the full promise of America within reach for so many,” he said in a message to AAUC’s third annual National Civic Leadership Forum.

“Your work reminds all of us that every voice deserves to be heard, that involvement in civic life makes a real difference, and that–in this Nation–everyone is meant to thrive,” Biden said according to an AAUC press release.

“The diversity of cultures and the breadth of achievement in the AA and NHPI community shapes and strengthens the fabric of America,” he said to the community which has faced a spate of horrific and bigoted racial attacks during the Covid pandemic.

The President acknowledged that the community is fully cognizant “that there is no singular AA or NHPI identity, but there is so much strength in the values you share.”

As his administration “works to build a more just and inclusive country, I am grateful to have partners like the AAUC by my side,” he declared.

“May you reflect with pride on the positive impacts you have made and will continue to make long into the future,” Biden said. “Together, there is nothing we cannot accomplish.”

Earlier, welcoming the delegates AAUC president and NCLF event chair Dr. S.K. Lo said AAUC believes that the AAPI community is no longer a passive, silent minority and argued that civic engagement is an important ingredient to become part of the integrated fabric of the USA.

“We need to capture this awakening momentum to create the change we all desire, ” she said. “It is the long-term goal of our forum to forge unity among our diverse communities and to speak with One Voice.”

“Thus, we have the power to change the environment for our communities and to live our collective American Dream,” Lo said. “It is our hope that through this Forum we are able to find the One Voice that unites rather than divides us!”

At the conclusion of the conference, Lo exhorted the conference leaders to draft a Call-to-Action Plan, “to create the change we want to see in the US at all levels of government from school boards to the federal levels.”

Reflecting the rise and influence of the Asian population Nevada Governor Steve Sisolak, and Las Vegas Mayor Pro Tem Stavros Anthony, were among those who sent messages of greetings. 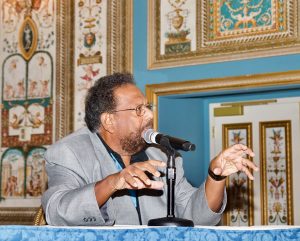 Former Executive Editor of India Abroad Aziz Haniffa, spoke on the importance of an independent media from the vantage point of a journalist with more than three decades of experience covering political and diplomatic stories and chronicling the immigrant experience of the South Asian and the broader Asian American community.

The plenary sessions included the “Asian Americans and Pacific Islanders (AAPI) Civic Engagement: Past, Present, and Future” and “How to Influence Legislation and Public Policy.”

At the gala banquet on the second day, Maeley Tom and US Rep Pramila Jayapal (in absentia), Washington state Democrat and chair of the Progressive Caucus in the US House of Representatives, were presented two special awards for being leaders exhibiting outstanding public service and political leadership.

President’s youth award went to Vivek Pandit, and Philanthropy award was given to the benefactor and major funder of all three conferences, Sandy Chau. The non-profit group from Minnesota, CACC was also awarded for doing great service to the community.

A cultural program followed with Chinese folk to Hawaiian and Samoan dancing and some rollicking Bollywood dancing, including the bhangra.