Oscar contenders include Delhi Safari in the animation category.

WASHINGTON, DC: Towards the end of every year, typically in the months of October through December, movie theaters are flooded by so-called “awards contenders,” films that studios purposely release late in the year so that they remain fresh in the minds of Academy Award voters. This past year was no different, with some 2012’s best features being released during fall and winter.

The 2012 Best Picture race is, for a change, refreshingly unpredictable. Usually by this time, thanks to numerous critics’ circles and guilds having already given out awards, there’s already a film that leads the pack. But this year, although a number of films appear to be guaranteed at least a nomination, none of them have emerged as a clear front-runner to actually win the award.

In 2009, after controversy broke out when commercial and critical smash The Dark Knight was snubbed for a Best Picture nomination and the Oscar telecast faced embarrassingly low television ratings, the decision was made to increase the number of Best Picture nominees from five to ten. Two years later, the rule was further amended so that the Best Picture prize could have anywhere between five and ten nominees. That makes guessing the nominees even harder. Films like Argo, Lincoln, Les Miserable, and Zero Dark Thirty are all but certain to receive nominations on January 10th. But what films could end up being nominated as well? 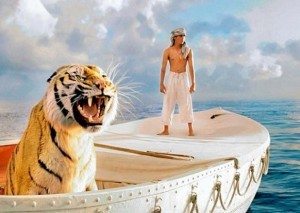 Ang Lee’s adaptation of Yann Martel’s bestseller, Life of Pi, is likely to be nominated for the top prize, as well as for a number of other categories like Best Director, Cinematography, Visual Effects, and Score (its largely Indian cast has also been praised by many critics, but no actor has been singled out for any individual awards).

David O. Russell’s Silver Linings Playbook – which features Bollywood actor Anupam Kher in a small role – will also probably get a Best Picture nomination along with nods for Best Actor, Actress, Supporting Actor, and Adapted Screenplay. Even Skyfall, the latest James Bond film, has become a very serious candidate for a Best Picture nomination, especially after securing a nomination from the Producers Guild of America this week.

Hollywood has seen an increase in the number of high-profile films released with overtly political stories and themes. Three major awards contenders are historical dramas about politically charged events in American history: Argo tells of a joint US/Canadian mission to rescue American embassy workers during the 1980 Iran hostage crisis, Lincoln details the political struggle necessary to pass the Thirteenth Amendment (which abolished slavery), and Zero Dark Thirty follows the decade-long manhunt by American intelligence and military forces to capture and kill Osama Bin Laden. In fact, the release dates of Lincoln and Zero Dark Thirty were intentionally set for after November 6th, since neither film’s studio wanted their film to be perceived as a political propaganda (Lincoln for the Republicans, Zero Dark Thirty for Democrats).

The Best Actor race is unusually crowded, so much so that some very deserving performances may go unrecognized simply because there are only five nominations to give out. The one virtual lock – and front-runner to win – is Daniel Day-Lewis’s performance as the title character of Lincoln. His performance has garnered rave reviews from critics, and has won a slew of critics circle awards. Other contenders include Joaquin Phoenix for his incredible work in The Master, Denzel Washington as an alcoholic pilot facing a potential life sentence in Flight, Bradley Cooper (Silver Linings Playbook)as a man coping with the dual threat of a psychological disorder and falling in love, and Hugh Jackman as hero Jean Valjean in Les Miserables.

The Best Actress race, on the other hand, boils down largely to two young actresses: Jessica Chastain and Jennifer Lawrence. Chastain, who had a breakout year in 2011, plays the central character Maya in Zero Dark Thirty. Based on a real female officer at the CIA, the character is largely responsible for spearheading the search for Osama Bin Laden, and is credited with being one of the key people involved in authorizing the raid on the compound where Bin Laden was ultimately found. Lawrence’s role, on the other hand, is far lighter – she plays a young woman going through a divorce who becomes Bradley Cooper’s character’s object of affection. The race between the two actresses is fairly close, but Chastain is considered the slight favorite to win the award.

Best Supporting Actor is another crowded field, with some big names all fighting for attention and votes. Robert De Niro, a two-time Oscar winner, hopes to score his first nomination in over 20 years for Silver Linings Playbook. Leonardo DiCaprio, considered by many to be the favorite, plays against type as an incredibly evil and vicious slave-owner in the pre-Civil War south. Tommy Lee Jones’s performance as abolitionist Thaddeus Stevens in Lincoln is considered a strong contender, as well. Phillip Seymour Hoffman is also practically guaranteed a nomination for his performance in The Master. Another performance that may get a nomination is that of Javier Bardem in Skyfall, in which he plays a villain seeking vengeance against Bond’s boss. If Bardem gets the nomination, it would be the first Oscar nomination a Bond film has ever received in an acting category.

The Supporting Actress race is, again, the complete opposite. Most prognosticators have all but given the award already to Anne Hathaway for her devastating performance in Les Miserable. Hathaway is also being given a push in the Lead Actress category for her work in the blockbuster The Dark Knight Rises, but a nomination there is highly unlikely. The only other performances creating any kind of buzz are those of Sally Field in Lincoln and Amy Adams in The Master, but since the latter was ignored by the Screen Actors Guild awards, her chances of landing an Oscar nomination are diminishing.

The Foreign Film Category has already been whittled down to nine nominees, with Amour (Austria), The Intouchables (France), and A Royal Affair (Denmark) considered the favorites. India’s entry, the Bollywood hit Barfi, did not make it past the preliminary voting rounds. The Documentary field is, as usual, populated mostly by art-house films that most moviegoers have never heard of because they don’t get played at multiplexes. A couple of entries, like Bully, have received more publicity than others, but this category is always considered one of the least popular by general audiences.

India is also continuing to make a splash at the Oscars, despite not receiving any recognition in the Foreign Film category yet again. As mentioned, Life of Pi focuses significantly on an Indian lead character (played by newcomer Suraj Sharma) and features performances from Bollywood veterans Irrfan Khan and Tabu. The film also employed a number of Indian crewmembers when shooting took place in Pondicherry and Kerala.

Additionally, Steven Spielberg’s Lincoln was co-produced by Reliance Entertainment as part of a partnership between the two that began in 2009. Zero Dark Thirty was partially shot in areas of Chandigarh, which doubled for Pakistan during key sequences in the film. Another film shot mainly in India is The Best Exotic Marigold Hotel – a British ensemble film co-starring Dev Patel (Slumdog Millionaire) – which has been nominated at the Golden Globes and Screen Actors Guild and could land Oscar nominations in the Supporting acting categories. India is also making strides in the Animation category, with Delhi Safari included on the list of potential nominees for Best Animated Film.

If, while reading this article, you realize you haven’t seen (or heard of) some of the movies described here, you still have time! Although Oscar nominations are announced on Janurary 10th, the awards aren’t given out until Sunday, Feb. 24th. Until then, get ready for what’s sure to be a great awards season.