Asian Americans race ahead of Hispanics in education, jobs and skill levels.

NEW YORK: A new Pew Research Center study has substantiated the reason why many emigrate to America: to enjoy the benefits and quality of life in a developed nation regardless of their education, and even more importantly, to give an opportunity to their children to become as successful as one could imagine.

According to the study – based on an analysis of US Census Bureau data – second-generation Americans -the 20 million adult U.S.-born children of immigrants – are substantially better off than immigrants themselves on key measures of socioeconomic attainment. They have higher incomes; more are college graduates and homeowners; and fewer live in poverty. In all of these measures, their characteristics resemble those of the full U.S. adult population.

Hispanics and Asian Americans are the focus of the Pew findings. Each of these groups include immigrants from more than a dozen countries, all with unique cultures, characteristics and migration histories. 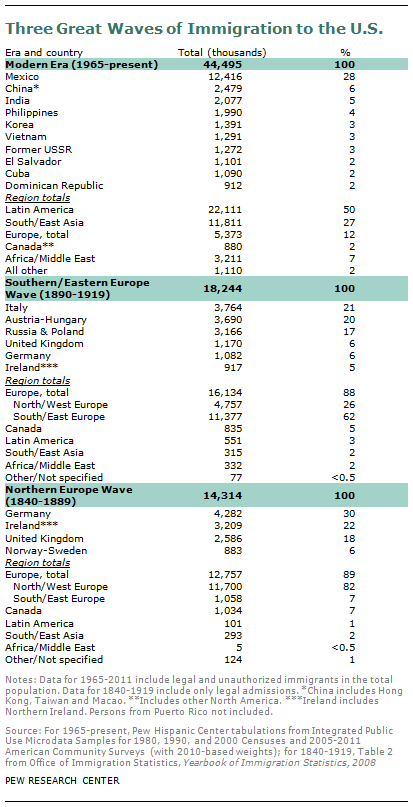 Despite these country-of-origin differences, some broad patterns are evident. The bulk of Hispanic immigrants have relatively low levels of formal education and work in low-skilled, low-paying jobs, while the majority of Asian immigrants – especially those who have arrived in the past few decades – have relatively high levels of education and skills that help position them for jobs in higher-skilled occupations.

These large racial or ethnic group differences in the human capital of recent immigrants are echoed in the socioeconomic profile of the second generation. For example, some 55% of second-generation Asian Americans have a bachelor’s degree or more, compared with 21% of Hispanics. There are also gaps in household income and poverty rates among second-generation Hispanics and Asian Americans.

But while large gaps remain between groups, it is also the case that within each group, the second generation is doing better than the first on most key measures of economic success.

Some scholars of immigration have questioned whether today’s immigrants and their offspring will be able to match the high levels of intergenerational upward mobility experienced by much of the immigrant stock of the 19th and early 20th centuries.

The skeptics cite many factors: Most modern immigrants are non-white and thus face deeply ingrained social and cultural barriers; about a quarter of today’s immigrants (the vast majority of whom are Hispanic) have arrived illegally and thus must navigate their lives in the shadows of the law; globalization and technology may have eliminated many of the jobs that provided pathways to the middle class for earlier generations of hard-working but low-skilled immigrants; the relative ease of travel and communication have enabled today’s immigrants to retain their ties to their countries of origin and may have reduced incentives to adapt to American customs and mores.

The Pew study does not making a definitive statement about the success of today’s second-generation immigrants compared with those of earlier eras. It says data trends do not extend far back enough in history, and many of today’s second generation are just now starting to age into adulthood (16 million are under the age of 18), and with more than a million new immigrants continuing to arrive each year, it will take decades before one can attempt a comprehensive generational scorecard of the modern wave of immigrants and their children.

But the study declares that members of the second generation will have “a major impact on America’s destiny for decades.”

Hispanics and Asian Americans make up about seven-in-10 of today’s adult immigrants and about half of today’s adult second generation. The Pew finds that the second generations of both groups are much more likely than the immigrants to speak English; to have friends and spouses outside their ethnic or racial group, to say their group gets along well with others, and to think of themselves as a “typical American.”

The study also find that second-generation Hispanics and Asian Americans place more importance than does the general public on hard work and career success. They are more inclined to call themselves liberal and less likely to identify as Republicans. And for the most part they are more likely to say their standard of living is higher than that of their parents at the same stage of life. In all of these measures, the second generation resembles the immigrant generation more closely than the general public.

As the U.S. Congress gears up to consider immigration legislation, this new report on second-generation Americans looks at the attitudes, values, life priorities, economic experiences, intergroup relations and identity markers of a group that will have a significant impact on the nation’s economy and politics for decades to come. 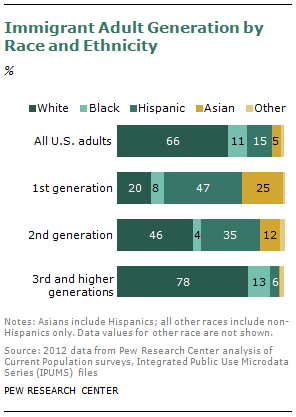 Given current immigration trends and birth rates, virtually all (93%) of the growth of the nation’s working-age population between now and 2050 will be accounted for by immigrants and their U.S.-born children, according to a population projection by the Center.

By then, the nation’s “immigrant stock” (first and second generations combined, adults and children combined) could grow from 76 million now to more than 160 million, at which point it would comprise a record share (37%) of the U.S. population.

The focus of this report is on the 20 million adult members of the second generation (an additional 16 million U.S-born children of immigrants are under the age of 18). This is a heterogeneous group that includes many younger Hispanic, Asian-American and white adults who are the children of modern-era immigrants as well as many older adults who are mostly the children of European immigrants who arrived as part of an earlier immigration wave that peaked a century ago.

The study says adults in the second generation are doing better than those in the first generation in median household income ($58,000 versus $46,000); college degrees (36% versus 29%); and homeownership (64% versus 51%). They are less likely to be in poverty (11% versus 18%) and less likely to have not finished high school (10% versus 28%). Most of these favorable comparisons hold up not just in the aggregate but also within each racial/ethnic subgroup (e.g., second-generation Hispanics do better than first-generation Hispanics; second-generation whites do better than first-generation whites, and so on).

The Pew surveys of Hispanics and Asian Americans – the groups that comprise the bulk of the modern immigration wave – find that roughly six-in-ten adults in the second generation consider themselves to be a “typical American,” about double the share of immigrants who say the same. Still, most in the second generation also have a strong sense of identity with their ancestral roots. Majorities say they identify themselves most often by their family’s country of origin, like Indian American or Chinese American, or by a pan-ethnic or racial label, like Hispanic or Asian American. Some 37% of second-generation Hispanics and 27% of second-generation Asian Americans say they most often describe themselves simply as “American.”

Also, about half of second-generation Latinos (52%) and about two-thirds of Asian Americans (64%) say their group gets along well with all other major racial and ethnic groups in America; smaller shares of Latino (26%) and Asian-American (49%) immigrants say the same. The second generations of these groups are also more likely than the immigrants to say they have friends outside of their ethnic or country of origin group.

The study also has numbers on inter-marriages, and says about one-in-six (15%) married second-generation adults have a spouse of a different race or ethnicity from themselves, compared with 8% of all immigrants and 8% of all U.S. adults. Intermarriage rates are especially high for second-generation Hispanics (26%) and Asian Americans (23%).

About three-quarters of second-generation Hispanics (78%) and Asian Americans (72%) say that most people can get ahead if they’re willing to work hard. Similar shares of the immigrant generations of these groups agree. By contrast, 58% of the full U.S. population of adults feel the same way, while 40% say that hard work is no guarantee of success.

Second-generation Hispanics and Asian Americans, as well the first generation of each group, identify more with the Democratic Party than the Republican Party and characterize themselves as liberals at higher rates than the general public, says the study. About half or more of the second generation believe that abortion should be legal, and more than two-thirds say homosexuality should be accepted by society. The relative youth of the second generation contributes to, but does not fully explain, their liberal political leanings.

By lopsided margins, most second-generation Hispanics (67%) and Asian Americans (75%) say their standard of living is better than that of their parents at the same stage of life. Similar shares of the immigrant generations of both groups say the same. By contrast, 60% of the full U.S. population feel the same way. Looking ahead, two-thirds of second-generation Hispanics, but 41% of Asians, believe their own children will eventually surpass their current standard of living. Overall, 48% of American adults say the same.

The study also points out that seven-in-10 second-generation Asian Americans and eight-in-10 (81%) second-generation Hispanics say that conditions for raising children are better in the U.S. than in their parents’ country of origin. Like immigrants, they also rate the U.S more favorably than their ancestral country in terms of treatment of the poor and the opportunity to get ahead. Less than half of both generations rate the U.S. as better than their ancestral country as a place to maintain strong family ties.

Immigrants tend to have higher birth rates than do native-born Americans, says the study. If current immigration flows and birth rates continue, then by 2050, an estimated 37% of the U.S. population-highest in modern history – will be immigrants or the children of immigrants, according to a 2008 Pew Research population projection. That projection also shows that, because of the aging of the Baby Boomer generation, as much as 93% of the growth of the working-age population between now and then will be accounted for by immigrants (43%) or their U.S.-born children (50%).

The modern immigration wave to this country began with the passage of landmark legislation in 1965 that had the effect, for the first time in the nation’s history, of opening U.S. borders on a roughly equal basis to non-Europeans as well as Europeans. Half of the 44 million immigrants who have come since then have been from Latin America, about a quarter (27%) from Asia, and the remainder from other regions. In the nation’s two previous immigration waves during the late 19th and early 20th centuries, nearly 9-in-10 new arrivals were Europeans.