CHARLOTTESVILLE, VA , DC: The horrendous Delhi gang rape in December of 2012 brought women’s issues, most notably rape culture and treatment of women in society, to the forefront of mainstream Indian conversation. The incident, as horrible as it was, is not the first of its kind nor was it the last. However, women and men across India joined in protest and in conversation from all classes and backgrounds as to why this was continually being allowed to happen. 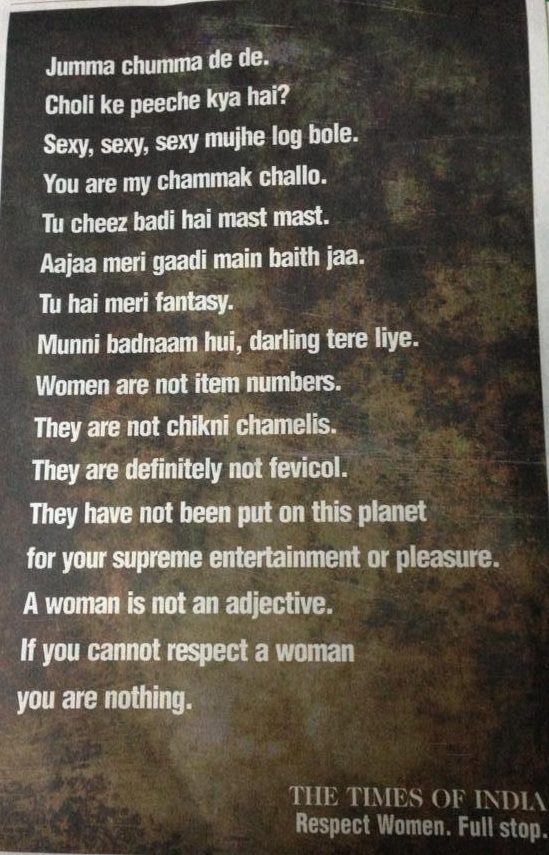 The Times of India, India’s leading English language newspaper, began publishing a series of ads entitled “Respect Women. Full stop”. These ads took up a quarter of the page and featured only text in black and white. One ad in particular, published in February, addressed the nature of Bollywood ‘item songs’ by transcribing the chorus line of several popular, mainstream Hindi songs from the last 25 years. The ad ended with the lines “They [women] have not been put on this planet for your supreme entertainment or pleasure. A woman is not an adjective. If you cannot respect a woman, you are nothing.”

Bollywood, India’s Hindi language film industry, is often used as a means of escape and fantasy for the over 11 million cinemagoers per day. Almost every movie has songs interspersed throughout the entire plot. Every song is not created the same, however. A special genre of songs, called ‘item songs’, is often included in huge blockbusters. These songs often star an actress, famous or just a mere starlet, who appears in the film just to dance in this number. Item songs of late have contained actresses wearing skimpy outfits and are characterized by skimpy clothing and suggestive choreography and lyrics. These songs are often played constantly on television and the radio and become nationwide sensations, where debates are not focused on the sexual nature of the songs, but what the “Top Item Song of the Year” is.

Veteran directors, such as Ramesh Sippy, have said that item songs “instantly attract attention, musically as well as visually… this increases the recall value of the film and also helps push the music sales.” These often boost the careers of the actresses who continue to star in these numbers, earning them the title of ‘item girls’. The terminology itself degrades these women below human beings to inanimate objects who are simply there for the pleasure of the viewer, presumably male. The ad takes notice of this, writing out the transliteration of 10 of some of the most popular item songs from the last three decades.

The ad was targeted towards a more educated public in India who has knowledge of mainstream Bollywood cinema. Since the Delhi rape in December brought up several issues regarding city versus village life, it can be said that this ad targets mostly the city folk. The message fails to impact villages where English is not spoken and where many presumed sexual violence cases go unreported. The audience is also presumably directed towards males, who would have women as their fantasy. The use of the word “you” makes it seem as if the producers of the ad are speaking directly to the men of India; calling them out on an entire culture of chauvinistic popular culture. The newspaper also includes its name at the end of the ad before the tagline “Respect Women. Full Stop”. It clearly wants to be associated with the respect women movement that has risen in India; so it is much as an ad for itself as a progressive newspaper as well as an ad movement to respect women.

Another aspect to note is the lyrics chosen by the newspaper. They are all lyrics from popular ‘item songs’ from the last 25 years with suggestive lyrics. These lyrics are transliterated into English, though many of these songs have English words in them already.

The first song, “Jumma Chumma De De” (Hum, 1991), which means “Give us a kiss” is sung by a group of men, including the hero of the movie, to an ‘item girl’, who is just dancing in this song, situated in a bar. Many of the songs used in this ad take place in clubs or bars, where the hero is intoxicated. Two other phrases used, “Chammak Challo” (Ra.One, 2011) and “Chikni Chameli” (Agneepath, 2012) are euphemistic slang for prostitutes, especially ones who dance, and from the countryside. The words refer to the color of their skin as well as their jewelry and ornaments, not to the woman herself.

This deconstruction of women plays along the male gaze, viewing the female in parts rather than a whole. This plays on the notion of taking advantage of uneducated women for the use of pleasure. Another interesting aspect to note about the lyrics is the use of English. To a non-Hindi reader, the words that jump out are “sexy”, “fantasy”, and “darling”– words that clearly have a romantic and sensual connotation for a male audience. The word “sexy” does not have a counterpart in the Hindi language but shows an aspect taken from globalization and increased interaction with Western culture.

The lyrics also have a sense of commercialization beyond attracting viewers to films. Songs such as “Munni Badnaam Hui” (Dabangg, 2010) and “Fevicol Se” (Dabangg 2, 2012) have references to actual commercial products within them, a pain reliever and Fevicol glue, while another song was popularly used in chips commercials for quite a while. This shows that the item in these ‘item songs’ refers not just to the woman, but often the product she is trying to promote within the song. This parallel that the song draws between the woman and the product is striking, using one to sell the other.

The black and white nature of the quarter page ad is also striking. Despite the fact that the Times of India publishes in color, the creators of the ad chose to simplify the message into two colors so that there is quite literally, no gray area. This symbolizes the stark nature of what the producers are trying to convey. Even though that some say these item songs are to be taken lightly and are not an explicit sexual degradation of women, they clearly think that the use of these lyrics does send subliminal messages that highlight the nature of women in popular Indian culture. The black background clearly draws attention to the ad without being too jarring, while the white writing plays to the simplicity of the ad.

Given the wide circulation of the newspaper, it is clear that a quarter page of ads is a significant loss of ad revenue. They obviously thought it was important enough to warrant not just one, but two separate ads relating to various reasons why Indian culture seems to lack respect for women. The ad, however, is clearly not on the front page of the paper. Therefore, presumably, only people who would read the entire newspaper cover to cover would see this ad. This perhaps narrows down the audience from English speakers to those who would be interested in reading the entire paper.

In analyzing this image, it is also crucial to note that there is no actual image accompanying this ad. Its textual simplicity draws attention to it. If an image were added, the message that it would get across would be more about the image. Regardless if the image was a Bollywood item girl or not, she would be associated with the ad, which would be extending the commercialization and objectification of the woman, much like item songs themselves. Any image of a woman that would be alongside the ad would be objectifying the woman even further. When confronted with just the lyrics in such bold and simple print, the reader is forced to deconstruct his or her thought process with the songs.

At first, the reader may be curious as to why these lyrics were chosen. As they get to the second half of the ad, the reader begins to realize the point of the ad: that the popular Bollywood culture that is so intrinsic to Indian ways subliminally subjugates women. By being a consumer of this mainstream media, the reader perhaps internalizes many of these attitudes of songs that are popular across the spectrum of age, region, gender, and class. It is the kind of ad that gets the public talking, which can be seen by the explosion of blog posts and conversation of Facebook and Twitter that erupted after the publishing of this ad and the previous one.

The lack of an image with the ad increased the shock value as well as the staying power of the ad in readers’ mind.

The writer is a senior at the University of Virginia studying foreign affairs.