Getting popular as an integral part of culinary tourism of Kerala.

THIRUVANTHAPURAM: Kerala has always been an old favorite among tourists. This sliver of sheer green nestled between majestic hills on its east and the emerald expanse of the Arabian Sea are where folks craving for a getaway usually land up. Offering a feast of some of the world’s best delicacies, surrounded by a palette of soothing sceneries, Kerala now has something surprisingly new up its sleeve — Ayurvedic food. This could for some immediately conjure up images of bland, boiled or steamed veggies, but on the contrary, it is a whole new experience that is poised to explode the taste buds of fastidious gourmands and foodies alike. 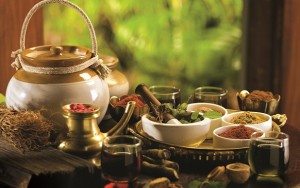 The icing on the cake is that Ayurvedic food helps remove the accumulated toxins from the body – a sound temptation for those who are recklessly indulging in junk food, tinned delicacies and aerated drinks.

The American Bazaar spoke to a host of people offering this unique experience at Santhigiri Ashram at Thiruvananthapuram.

“Ayurvedic food is a superb combination of exquisite gastronomical delight and wellness properties. It is wrong to suggest that Ayurvedic food is bland and insipid and is only a necessary part of the treatment,” S. Vijayan, Senior Manager of Santhigiri Ashram, a famous Ayurvedic center in Kerala said in an interview.

Vijayan points out that an increasing number of tourists are indulging their taste buds with Ayurvedic food and it can be made an integral part of culinary tourism of Kerala which is becoming popular with holidaymakers, especially the Germans, British, Russians, French and Americans.

“There is a ready acceptance for healthy Ayurvedic food among the foreigners who are Calorie-conscious and tend to avoid fried, oily and greasy food. Ayurveda cuisine suit their palates,” he says.

Santhigiri, which runs 102 Ayurveda and Siddha hospitals across the country, has employed and trained cooks and dieticians to prepare special food as per the doctor’s advice.

“It is tailor-made and customized in accordance with a patient’s requirement, but there is less dependence on oil, salt and sugar. Instead, there is a greater use of spices and herbs like pepper, cardamom, ginger, garlic, turmeric, mustard seeds, curry leaves and rock salt as well as fruits and vegetables,”  Dr. Raveendran Narayanan Vaidyar, Chief Medical Officer, Santhigiri, told the Bazaar. 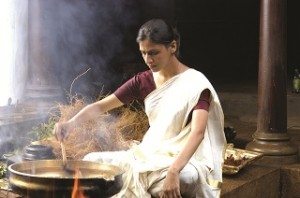 “To make food tasty, we also add a herb called karuppatti (tastes like jaggery), which is also full of medicinal value. Tamarind is not used in Ayurveda, but one of its varieties, known as kudampuli, is used in Ayurvedic food for treatment,” he points out.

Ghee (clarified butter) is also an important ingredient in the food-based Ayurveda treatment. “Ghee is important because it is the carrier of medicines. Especially in mental disorders, it is a must for the treatment called snehapanam. During this treatment, ghee is administered for a period ranging from 7 to 21 days and the intake increases beginning from 25 ml to 300 ml. Foreigners also take ghee as it is part of the preparatory stage of ‘panchakarma’ or five-stage detoxification and rejuvenation program,” he elaborates.

Experts point out that Kerala delicacies like Idiyappam, Puttu (a steamed rice powder preparation) and stew are influenced by the Portuguese cuisine, but the Ayurvedic food is purely indigenous.

Yeldo T. J., resort manager of the popular Travancore Heritage, points out that there are two categories of foreigners. There are pure holidayers, who look for non-vegetarian food like chicken, beef and fish washed down with wine and beer. And there are tourists who come for panchakarma therapy or treatment for chronic illnesses and their dietary regimen is controlled by their consulting Ayurveda doctors.

“Ayurveda food for treatment varies from individual to individual. For the initial two-three days, there is normally a little reluctance among the foreigners for such food, but Germans enjoy this as they are mentally prepared to undergo the entire course of Panchakarma treatment (14/ 21/ 28 days),” he adds.

Travancore Heritage gets repeat clients from Germany, Italy, France, Britain and Russia. Some tourists have been coming for last 3-4 years and some for even last seven years for a 3- 4 week stay.

“Occupancy-wise, we have more British, but for the Ayurveda treatment, they are more from Russia and Germany, and they do like the Ayurveda food,” reveals the manager.

Dr. Binod Sydney, Chief Physician at Travancore Heritage, says as part of Ayurvedic treatment, only pure vegetarian food is provided, but at times grilled fish and wheat bread are included in the menu of those foreigners who start grumbling.

“We have a specially trained chef here for past 11 years with expertise in Ayurveda food. We chalk out special menus according to the body constitution of three doshas — Vata, Pitta and Kapha. All three constitutional types are aggravated and pacified by different food items.

Once you know your body type, you can include or exclude food items to balance your doshas. Regular intake of Ayurveda food can also remove the craving for meat, alcohol and smoking. A healthy person needs to have his doshas in perfect equilibrium. As such, it is essential to eat such Ayurveda foods which can pacify the inherent doshas in the body. Any imbalances between the three lead to accumulation of toxins that trigger diseases.

The state-owned KTDC Samudra, a prominent hotel in Kovalam with Panchakarma facility, has also chefs with expertise in Ayurveda food.

“Foreigners coming for recreation normally like grilled fish, beer, wine and roasted chicken, but there are also those who opt for vegetarian Ayurveda food as part of Panchakarma therapy. And they do like it,” says Samraj M. Joseph, the hotel manager.

KTDC or Kerala Tourism Development Corporation (KTDC) which has launched a tourist-friendly Age Halt Program with Santhigiri has employed trained cooks at all its properties. “During Panchakarma treatment, emphasis is always on health-giving foods like sprouted beans, vegetables, rice soup (Kanji) with herbs and curry leaves,” he says.

“It is prepared only during the monsoon months and sold as kits. It is a big business in Ayurveda with 50,000-60,000 units being sold in local market alone. One kit lasts for seven days for one person,” says Vijayan. “We are also looking for producing seasonal Ayurvedic (medicated) drinks which has a huge potential’’ Vijayan adds.

Ayurveda does not offer instant nirvana, but constant practice can do wonders. Kerala’s rich variety of herbs and vegetables can be whipped up to create marvels for the mind, body and of course the tongue that would a go a long way to wipe the dust and grime of everyday life, and is a route to wellness.