The 26-year-old magazine distributed free of cost at more than 250 locations. 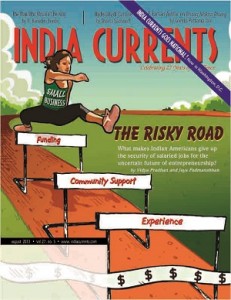 After being an important aspect of the Indian American life on the west coast for more than 26 years, the magazine is looking to make its readership nationwide by launching its first east coast edition.

India Currents is an important facet of America’s emerging multicultural identity—a monthly publication devoted to the exploration of the heritage and culture of India as it exists in the United States. The magazine covers a wide range of subjects—music, dance, film, literature, travel, recipes, business. At the heart of the magazine is a comprehensive calendar of Indian events, used extensively by readers to plan their leisure and entertainment. India Currents has won a lot of praise and recognition for its editorial content over the years.

“It is true that we have changed our look in ways we couldn’t have imagined 26 years ago. Yet, we did imagine the deep roots we have cultivated with the community that surrounds us and supports us. We remain true to our core values of being a voice of the community. Some things don’t change,” says Vandana Kumar, Publisher of India Currents, who was in Washington DC for the launch. “In the beginning, we looked only to bring the Indian community together. Today we’ve expanded to actively building bridges—between South Asian communities and the larger American community, between generations, and exploring what it means to be a hyphenated American.”

This is India Currents’ third edition after two others in Northern and Southern California. It will be distributed free of cost at more than 250 locations in the Washington, D.C., metropolitan areas, including Indian American-owned groceries and restaurants, as well as temples and gurudwaras.

“The impact India Currents has been having on the Indian American community for more than a quarter century and its proven commitment to excellence were what attracted us to partner with the magazine,” says Asif Ismail, publisher, IC New Ventures, LLC that brings this edition the Washington DC metro area. “We were also impressed by India Currents’ coverage of the community and its stable of volunteer story-tellers.”

The August 2013 issue of India Currents is already on the stands at locations throughout the area. The next issue is due to hit presses in early this month and will be distributed soon thereafter.