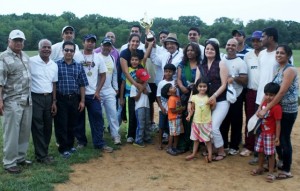 The two-day tournament saw teams from the Washington, DC metropolitan area participating. The teams had local players from select states of India, including from Andhra Pradesh, Maharashtra, Karnataka, Gujarat and Kerala.

The experienced Telugu team beat a team from Maharashtra by nine wickets to claim the title. The Marathi team reached the final by beating teams from Gujarat and Kerala.

Prajyot from the Marathi team, who performed consistently in all the matches with both bat and ball, was declared Man of the Tournament.  Gopi, an opening batsman from Hawks, who scored a total of 75 runs in the tournament, was declared Best Batsman and the Man of Match in the final. The Best Bowler award was given to Pranay, the captain of the Telugu Hawks.

The awards were given by Mayur Mody, the organizer of the tournament, and Dr. Suresh Gupta. The main sponsors for the event were Papa Johns, Subway and Sagar at Gaithersburg.

Dr. Rajan Natarajan, Deputy Secretary of State, External Affairs, Maryland State, was the Chief Guest for the closing ceremony. Dr. Natarajan informed the teams of the steps the state administration is taking to promote cricket in the state.

Cricket is getting increasingly popular in the area. The embassies of several countries have come together to organize a tournament later this month.