After 2009 bid for Congress, Saujani is vying for the office of NYC’s Public Advocate. 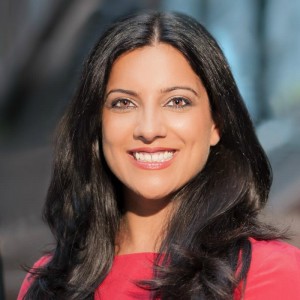 Saujani, a trained lawyer, was first noticed in community circles when she supported John Kerry’s 2004 Presidential campaign. She has the distinction of being the first Indian American woman to vie for the US Congress, when she took on Carolyn Maloney, from New York’s 14th District, in 2009, a contest which Saujani lost.

Saujani is the daughter of immigrants who were forced to flee their home in Uganda under threat of violence from the dictator Idi Amin. She graduated from the University of Illinois.  After interning at the White House Office of Public Liaison under President Clinton, she went on to earn a Master’s in Public Policy from Harvard’s Kennedy School of Government and is a graduate from Yale Law School, where she worked as a research assistant under the great Civil Rights Judge, A. Leon Higginbotham, Jr.

Moving to New York City with more than $200,000 in student loan debt, Saujani got a job at Davis Polk & Wardwell where she worked as a litigator and handled pro-bono asylum cases representing some of the city’s most vulnerable defendants.

Saujani founded South Asians for Kerry (SAKI) to activate the South Asian community in an unprecedented way, and served as co-chair of the DNC’s Trailblazers program, the under-40 fundraising effort to elect Democratic candidates across the country.  In 2008, she served on the National Finance Board for Hillary Clinton’s presidential campaign, and had the honor of serving as Vice-Chair of the New York delegation at the DNC.

After she lost the 2009 elections to Maloney, Saujani was appointed Deputy Public Advocate of New York City, where she served as Executive Director of the Fund for Public Advocacy.

Most recently, Saujani launched the innovative non-profit organization Girls Who Code, which is teaching teenage girls from all five boroughs of New York City the skills to get high-paying jobs in technology.  She brought together leaders from the tech industry including Twitter, Google, eBay, and General Electric with computer science experts and teachers to build a pipeline of engineering talent in New York City.  She is the author of a new book on female leadership called “Women Who Don’t Wait in Line,” which will be published by Amazon Publishing in 2013.

Saujani lives with her husband, Nihal Mehta, a tech entrepreneur, and their dog, Stanley, in the Chelsea area of Manhattan.

In an e-mail interview with The American Bazaar, on the day of the polls, Saujani writes about what are the issues she cares most about New York, and her ties to India. Excerpts from the interview:

What are the issues you care most about and want to change in the city, running for Public Advocate?

Right now, 46% of New Yorkers are under or near the poverty line. There are thousands more who are struggling to make it into the middle class or stay there. We need to help these people by creating more good paying jobs and education their children so they can go on to successful careers of their own. We can do that in New York by improving our schools, helping small businesses grown and encouraging industries like the tech sector grow and thrive, creating more opportunities for all New Yorkers.

You have worked as a lawyer on Wall Street for many years, had a lucrative career. At a time when many top Indian Americans have quit public service at Capitol Hill to get into private practice, what makes you want to join the government?

I have actually always been passionate about public service my entire life. Even when I worked in financial services, I was helping people with asylum cases and supporting causes to help the underserved. Now, I get to live my dream by running for an office that can make a real difference in the lives of millions of New Yorkers.

You have got several top endorsements, including from Queens County Democratic Party, Congressmen Joseph Crowley and Gregory Meeks, Congresswoman Grace Meng, and recently from a top director of Rev. Al Sharpton’s National Action Network, yet you are trailing in the polls going into the primaries. What is the one thing that voters need to know most about you?

Of all the candidates in the race, I’m the only one with the experience and a plan to turn the Public Advocate’s office into place that will accomplish real things for real New Yorkers. This office can be more than just a place for politicians to send out press releases and talk. I will create programs that will make more opportunity for all New Yorkers and empower women and girls in a way that has never been done before.

You have also been appreciated from many supporters for your opposition to the stop-and-frisk policy. Is this something that is changing the dynamics for the minorities in New York City, and takes confidence away from the NYPD?

The racist practice of Stop and Frisk has torn our minority communities apart. It has created an entire generation of young minority men who fear the police, not trust them, which will only lead to more dangerous communities in our future. That’s why we need to end it now and restore the confidence in the NYPD, so they can continue the vital work of getting guns off our streets and keeping our neighborhoods safe.

Your last campaign, running for Congress against Carolyn Maloney didn’t go well. What are some of the things you learnt from that campaign, and you are implementing here for the primaries for Public Advocate?

I have always talked about empowering women and girls and helping underserved New Yorkers, but at the time the conversation was about Wall St. and how it was affecting the economy. Looking back, I wish more people had got to know more about me and my passion for helping people from all backgrounds. That’s the real me and how I will approach the office of Public Advocate.

You were a supporter of John Kerry’s 2004 campaign for President. What led you to take up politics?

Again, I have always been passionate about public service and Democratic politics. Going back to college, I have fought for Democratic ideals and been involved in several Democratic groups. I welcomed the chance to help John Kerry get elected, and no matter what happens Tuesday, will continue to work with to get more Democrats elected.

If elected, what are some of the initiatives you would like to do specifically for the South Asian community in New York City?

We are a community of small business owners. I would help our small businesses by continuing to push back on the unnecessary fines faced by many of them. I’d also help them expand their businesses by giving them the tools to create websites and otherwise market their stores online. That will help them make more money and hopefully hire more people, which will help South Asians and all New Yorkers.

Though there are large pockets of South Asians in the city, the percentage of them leaping into politics stay miniscule. What is the reason for that?

In terms of New York City, we are a new community and it often takes time to get involved. My campaign has worked hard to get more South Asians out to vote, because that is the only way that our voices will be heard. As the first South Asian to run for a Citywide post, I think many people realize the historic nature of this election and I hope that inspires them to get more involved in the political process.

Your parents are from Gujarat. Do you travel to India? What has been your impression of India during your last trip?

I go back to India often and I love it. There are still so many people there that need help, but the culture and the energy there are uplifting. I don’t have much time with this campaign, but I look forward to going back soon