Film to be released in theaters in the US next month. 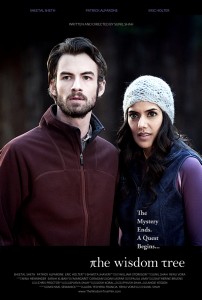 WASHINGTON, DC: A new film entitled ‘The Wisdom Tree’, starring Indian American actress Sheetal Sheth and featuring a largely desi crew, is gearing up for release across the US in January.

The Wisdom Tree tells the story of Steve Hamilton, a quantum physicist working on a potentially groundbreaking theory when he’s involved in a car accident that leaves him fighting for his life. He meets neuroscientist Dr. Trisha Rao (Sheth) and FBI Agent Mike Parker, and the three very different people become involved in solving a mystery that could change them forever.

According to The Wisdom Tree’s website, “The film heavily relies on — and attempts to bind — theories and doctrines, as well as hypotheses, from science and math, music, art, philosophy, mysticism, spirituality and intra-disciplinary possibilities, to create an engaging whole.”

The film is being hailed a highly spiritual experience that questions and assesses the relationship between science, religion, and spirituality. The film has received a number of positive reviews in its limited festival run so far this year, and is hoping to ride the wave of good publicity to a strong nationwide opening next month.

Sunil Shah is the director, writer, co-producer, and editor of the movie, which is his first ever. The film is also co-produced by Renu Vora, who also worked in the film’s art department. The director of photography (cinematographer) is Piyush Shah, a winner of India’s National Film Award who has worked on high-profile Bollywood film’s like 2007’s Salaam-e-Ishq and 1998’s China Gate. Classically trained Hindustani singer Shweta Jhaveri is the film’s music composer.

The Wisdom Tree also features work by an Academy Award winner. Two-time Oscar winner Michael Semanick is heading up the movie’s sound department. He won the Academy Award for Best Sound in 2004 and 2006, for The Lord of the Rings: The Return of the King and King Kong, respectively, and has been nominated seven other times. He has also worked with M. Night Shyamalan on the films ‘Unbreakable’ and ‘Lady in the Water’.