‘Essential foreign diplomats in the US are treated with dignity, respect and sensitivity’. 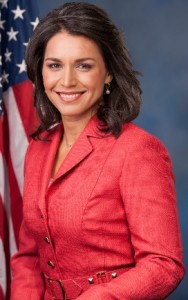 WASHINGTON, DC: US Congresswoman Tulsi Gabbard (D-HI) has expressed her “disappointment” at the arrest of Indian Deputy Consul General Devyani Khobragade, the first such statement released by a member of the US House of Representatives.

Gabbard said that she was “disappointed” when she found out about Khobragade’s initial treatment by law enforcement officials upon her arrest, saying that foreign diplomats must uphold US law but are also entitled to dignified treatment.

“While we must ensure our laws are being followed by all those who reside in or visit our country, it is also essential that foreign diplomats in the U.S. are treated with dignity, respect and sensitivity, as we expect the same for our own diplomats abroad,” said Gabbard in a statement.

Gabbard also stressed the importance of the ongoing US-India relationship, saying that Khobragade’s arrest should not come at the expense of such a vital partnership between the two nations.

“Our relationship with India is deeply valued,” said Gabbard. “I urge the State Department to work with its counterparts in India to ensure our relationship remains strong and to ensure our law enforcement agencies put appropriate protocols in place for these situations.”

Gabbard’s comments on Khobragade’s arrest come just a day after her office released a separate statement condemning House Resolution 417, saying that the Congresswoman would not support the controversial legislation.

HR 417 was introduced into the floor of the House of Representatives on November 18 by Rep. Joe Pitts (R-PA) and Rep. Keith Ellison (D-MN). It alleges that the majority of religious-based violence in India is to be blamed on Hindus, and that the Indian government must act quickly and decisively to stem the tide of bloodshed against religious minorities.

In her statement, Gabbard — who is also a practicing Hindu — said “India is a democratic multi-cultural and multi-faith society, and shares many common values and strategic interests with the United States.  It is critically important that we focus on strengthening the ties between the two nations, and I do not believe that H.Res. 417 accomplishes this.”

In addition to its accusation of religious intolerance within India, HR 417 also applauds the US government for its continued anti-visa stance in regards to BJP candidate Narendra Modi. Gabbard’s statement does not, in any way, address that aspect of the resolution.

Gabbard concluded her statement by saying “I will continue my outreach with the Indian American community, and my focus on strengthening the U.S.-India relationship as we work together on addressing issues related to religious freedom and human rights around the world.”

Gabbard’s retaliation against HR 417 comes about a week after several other Congressman came out against the legislation, including House Foreign Relations Committee Chairman Ed Royce (R-CA). Royce, like Gabbard, said that HR 417 “weakens, rather than strengthens, the friendship between the US and India.”

The US India Political Action Committee (USINPAC) also denounced HR 417 earlier in December, as did the Hindu American Foundation (HAF), which called on the constituents of the resolution’s 29 supportive Representatives to voice their displeasure with the bill.