Album has covers of some popular Hindu devotional songs. 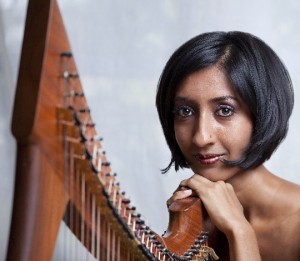 WASHINGTON, DC: As 2013 comes to an end, 2014 is looking to be a potential banner year for Indian-origin recording artists looking to make a name for themselves in the American music landscape, and the newest musician entering the fray is Sheela Bringi.

A student of Indian music for the past 15 years, Bringi is a talented singer and can also play the harp, harmonium, and bansuri, a type of Indian flute made of bamboo. She has spent the last year gearing up for the release of her first solo album, Incantations, which hits shelves and digital marketplaces on February 25.

Inspired by artists like Dead Can Dance and Academy Award-nominee M.I.A. (who collaborated with AR Rahman on the soundtrack for Slumdog Millionaire), Bringi knew from a young age that she wanted to make music an integral part of her life.

Her mother, Sreedevi, was a professor of Hinduism, Sanskrit and Yoga Studies at Boulder’s Naropa University. Bringi herself learned Vedic chanting from her grand uncle, and she later earned her Masters of Fine Arts degree from the California Institute of the Arts, in the field of World Music Performance.

Now, after performing in groups and ensembles for several years, she is ready to go solo. Bringi uses her considerable music skills to update classical Indian music. Many of her songs are covers of popular devotional songs and chants that she grew up with, such as tracks on her upcoming album entitled “Raja Ram,” “Saraswati,” and “Sri Krishna.”

“My music is about accessing a place of mystery and divinity,” says Bringi on her website.

Although Bringi’s maiden album will be available in February, some tracks have been released in anticipation of the full CD launch. They can be heard on her website.