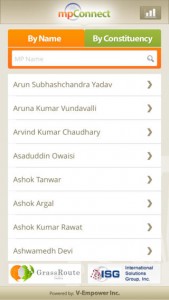 Ahmed’s company – V-Empower – a play on the phrase “we empower” – is behind an app called mpConnect, which aims to put the citizens of India in closer contact with their MPs who represent them in Parliament. The idea, believes Ahmed, could revolutionize the country and change the way politics is conducted for future generations.

“The users can look up the MP from the list and connect with their respective MP, either by calling, texting or by email,” says the app’s iTunes description. “We hope that the MPs shall contact you with their convenience. If they cannot [reply] per person, we shall provide them a web interface, where they can give a collective response of all the communications received.”

mpConnect is based off a similar concept V-Empower developed nearly a decade ago, for use in the US. The concept is more or less the same – give Americans the ability to easily get in touch with their Congressional leaders to tell them exactly what they feel are the most pressing issues in their communities. Made in the time before mobile apps, the concept became a website: www.StateDemocracy.com

Wracked by corruption and greed practically since its birth in 1947, the Indian government has started to see small changes to bring it away from those dishonest practices. V-Empower sees its app as a close relative of the Aam Aadmi Party, whose leader, Arvind Kejriwal, has been making waves with his no-nonsense, no-corruption stance in New Delhi, influenced directly by the teachings of social advocate Anna Hazare.

“We are ready to do our part as an Aam Aadmi [Party] technology company, “ Ahmed said in an email to The American Bazaar. “We can’t wait for Infosys, TCS, Wipro [and] Mahindra to build technology for the benefit of [the] Aam Aadmi. They are too focused on their bottom line and their stock price.”

Those aren’t the only two software V-Empower has developed for voters. They’ve also created CrimeBlotter.org, MDDemocracy.com (for Maryland state’s government specifically), PGBallot.com (a site for Prince George’s County, Maryland that should have an app released later this year), LobbyDelegates.com, and IndiaDemocracy.com, which was discontinued in 2012.

V-Empower launched the mpConnect app on iTunes on November 15 of last year, and it can be downloaded for free. It’s compatible with iOS 4.3 and higher, and is also optimized for the latest iPhone 5 models. Yet its success thus far is questionable – there are no customer reviews of the app, and V-Empower has not released numbers regarding how many mobile users have downloaded the app.

Ahmed is open, however, about his thoughts on political transparency and voter participation. He and V-Empower offer the source code for StateDemocracy to anyone who requests it, in the hopes of getting more and more people in smaller communities to get in touch with their legislative leaders.

“We are ready to share our source code of many applications which could be used by governments, political parties, and candidates,” said Ahmed.

Additionally, Ahmed remains highly involved in his own local community, using V-Empower to put hundreds of thousands – if not millions – of dollars worth of philanthropy into the local economy. In 2009, V-Empower was ranked #4 in this regard in the entire Washington, DC-metro area.

But can an app really change a system, let alone the largest democratic system in the entire world?

“As a technology company, we are frustrated with political leadership and their lack of imagination in utilizing technology to serve citizens more effectively and efficiently,” said Ahmed.

In other words: yes, the time has come.