Plans to run on a GOP ticket. 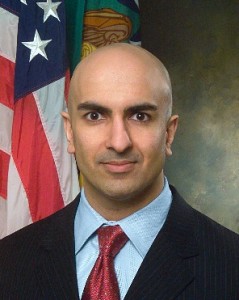 WASHINGTON, DC: Neel Kashkari, a former official with the US Department of Treasury, has announced that he plans to represent the Republican ticket in the race to be governor of California.

Kashkari, 40, made the announcement during a luncheon at California State University in Sacramento, the state’s capital, saying that he will be running on the platform of creating more jobs for the state’s residents and reforming the state’s heavily criticized public education system.

The announcement, though somewhat surprising, is not totally out of the blue. Kashkari has been meeting with several GOP leaders and donors over the past year, and has been making visits to schools and other poverty-stricken areas all across California. A multimillionaire himself, Kashkari said that he cannot self-finance his campaign and will need financial support from donors.

Additionally, Kashkari announced that his campaign team will comprise of political consultants who have aided the campaigns of presidential contenders Mitt Romney and John McCain, as well as former governor Arnold Schwarzenegger.

So far, he is up against just one other Republican: Tim Donnelly, a member of the California State Assembly who is notorious for his heavily conservative views. Although a Republican himself, Kashkari has stated numerous times that he is a supporter of GOP fiscal policies despite remaining liberal on several social issues, namely abortion and gay marriage.

Both Kashkari and Donnelly, along with any other Republican who choose to enter the fray, will take on the incumbent governor, Democrat Jerry Brown, who has been in office since 2011, when he succeeded the Republican Schwarzenegger

Kashkari has never held elected office so far in his career. His highest-profile stint in politics was as a high-ranking official in the Treasury Department. During his time there, from 2006 to 2009, he was a key player in the federal bank bailout program engineered by former President George W. Bush and continued by President Barack Obama.

Prior to that, Kashkari spent many years in the private sector, working for companies like TRW (a government contractor) and Goldman Sachs. After leaving the Treasury Department in 2009, Kashkari was hired as the managing director of Pimco, an investment firm. He left in January of last year, saying that he wanted to get back into politics.