A pioneer of innovative color technique. 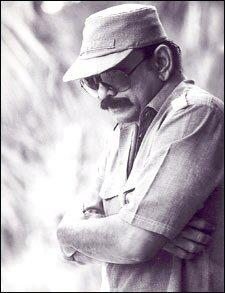 The 74-year old ace cinematographer, director, editor and screenwriter breathed his last at Chennai’s Vijaya Hospital following a cardiac arrest. He was admitted to the hospital when he reported a chest pain in the morning, but closed his eyes permanently at 11:00 a.m. He is survived by his wife, Ahileshwari Mahendra, and son Sangi Mahendra.

With his trademark blue cap as a part of his attire, the filmmaker left a deep mark on the film industry with his Tamil masterpieces like ‘Veedu’ (1988), ‘Azhiyatha Kolangal’ (1979), ‘Moondram Pirai’ (1982), ‘Sandhya Raagam’ (1989) and ‘Vanna Vanna Pookal’ (1991). He was a pioneer in introducing the concept of innovative color in south Indian cinema. He brought in a new style of storytelling through lens, a combination of natural light with characters’ expressions.

His body will be kept at his film school, Cinema Pattarai, as a token of homage for his fans and well-wishers. The theme of his films mainly dealt with day-to-day issues which changed the entire filmmaking scenario in South India.

A Sri Lankan Tamil by birth, Mahendra moved to India for pursuing film education at Film and Television Institute of India (FTII), Pune, graduating in cinematography with a gold medal. His film journey began as a cameraman for ‘Nellu’ (1971), which fetched him his first award as the best cinematographer from Government of Kerala.

In all, Mahendra won a total of five National Film Awards – two for excellence in cinematography. In addition, his kitty of awards includes three Filmfare Awards South and several other state awards from Kerala, Karnataka and Andhra Pradesh.

A Hollywood buff, Mahendra looked up to Alfred Hitchcock as his role model. He had a close association with music composer Ilaiyaraaja, who gave music to all his films. Mahendra’s last film was critically acclaimed, ‘Thalaimuraigal’, which he directed, and released this past December.

Many film celebrities paid a tribute to the legend through Twitter:

A.R.Rahman – Dear Balu Mahendra Sir Thank you for being an inspiring visual poet, for directing such life changing Tamil movies……You have certainly been an inspiring stepping stone of creativity for many others who came later… May God bless your soul!

Selvaraghavan – After watching kaadhal konden he called me to his office and we had a great time talking about cinema. Since then he’s always been a mentor. A legendary film maker who was so passionate about the art of film making.  #RIPbalumahendra sir. We’ll never see someone like u again.

K.V.Anand – RIP BaluMahendra Sir. Who ignited cinema passion in many of us.

Prakash Raj – Dear balumahendra sir. Thank you for enriching us with lovely movies.We Will always cherish your moments of creation. Thank you chief. RIP

Sridevi – Deeply saddened on the demise of Balu Mahendra.The legacy of his creations Sadma & Moondaram Pirai will live on.My condolences to the family

Siddharth – An inspiration,  teacher from a distance,  everlasting hero for most of us…The great Balu Mahendra sir has left us. Massive loss! Prayers.

Shruti Haasan – What a loss to cinema – may you rest in peace balu mahendra sir :( ur wonderful words and advice will always stay with me – fly with angels

Priyamani – Deeply saddened and shocked by hearing the news of the demise of Balu Mahendra sir…a big loss for the industry…will miss u sir..RIP