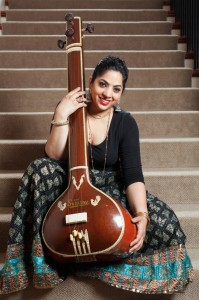 WASHINGTON, DC: Nistha Raj, a Washington, DC-based recording artist who specializes in Hindustani classical music, is getting ready to launch her debut solo album, “Exit 1.” The album is a collection of tracks that meld Hindustani music with more modern sounds to create a wholly synthetic but undeniably transcendent music that Raj hopes will introduce a whole new generation of music lovers to the wonders of Indian classical music.

Take “Jayanthi,” for example. One of the opening tracks of “Exit 1,” it combines a jazz saxophone with a spare table beat to create an intoxicatingly Arabic sound. One of the tracks is a cover of the immortal Bollywood classic “Ek Pyar Ka Nagma Hai” from the film Shor, which combines Raj’s delicate violin strings with a more traditional piano and percussion base.

“Bhairavi Beatbox” takes the craziness of beat-boxing and combines it with violin to create a sonic maelstrom that A.R. Rahman would be proud of. And several other tracks stay Indian, letting the beauty of the country’s classical music speak for itself.

The album will be released on Wednesday, February 26. In this exclusive interview with The American Bazaar, Raj talks about how the album “Exit 1” came about, what she hopes to accomplish with it, and where she plans to take her career in the future.

Music has been a lifelong passion for you, and has been an important part of your personal and professional life many, many years now. Where did the desire to finally release your own solo album come from?

Over the past four or five years, I really started collaborating with artists of different genres to kind of develop these ideas I had of fusing Hindustani classical music, which is the type of music I’m most familiar with, and just see where that would go.

I’ve been doing live performances for many years all over the world, and at a lot of these events people would ask me “Do you have an album?” and I’d always ”No,” because I didn’t. It’s very lengthy, very time-consuming, and expensive to put together an album, so it was always in the back of mind but I kept pushing it aside and saying “OK, when the time comes, I’ll do it.”

I applied for a grant from the SparkPlug Foundation in 2012, where I outlined my idea for an album. I had to submit a proposal, a work sample, all that kind of stuff, and they ended up liking it and agreed to fund it. So that was the big first step for me creating the album, because it afforded me the ability to go into professional recording studios and start actually start the process of putting together the album.

So what can you tell us in terms of the kind of music that will be on the album? You talked about fusion sounds, but specifically, what can people expect to hear from a Nistha Raj CD?

Well it’s kind of a big mix of everything, but the core of it is Hindustani classical music, which originates from north India. So the songs on the album are rooted in that style but then they bring in elements that are totally diverse, like beat-boxing, jazz, cello, even Carnatic music. And then there are also tracks on there that are pure Hindustani classical music with no fusion elements whatsoever.

It’s really a way to introduce audiences to Indian classical music in a new context that someone can relate to if they can’t necessarily relate to a more traditional presentation of Indian classical music. So the idea is to make a sound that may not be as popular with people today and infuse it with newer sounds to create something new and more palatable for the people who wouldn’t normally even look at classical Indian music. That was the idea.

Unlike most recording artists, you not only hold a bachelor’s degree, but a master’s degree as well, in Arts Management from George Mason University (in northern Virginia). Could you talk about how that education has played a part in your career, and why it might be important for artists to continue with their education?

Absolutely. My bachelor’s degree is in Music, which is obviously on the performance side and is important to me in that way. As for my master’s [degree] – that basically came out of the fact that I never really thought I was going to make music my full-time career. And that was for all the reasons: it’s too difficult, it’s very unreliable, it’s almost impossible to make a stable living off of it. So when it came time to go to grad school, I knew that I wanted to do something that would allow me to stay connected to the arts in some capacity; my thinking was that even if I’m not engaging in the arts myself, if I’m doing work that helps promote or facilitate arts and music on a larger scale, that will still be fulfilling in its own way.

So it was kind of my way of doing what I wanted to do with music but also allowing me to get a job that could earn me a decent living. And honestly, just about everything I learned in my master’s program has been applicable in my career so far. It taught me really basic things like how to market myself, how to draft a budget, write for grants – all those things. And I do some freelance work as a grant writer and as a performer with an institution I have a relationship with because of my time in grad school, so it was definitely a useful experience.

India has a very musically rich and artistically inclined culture, but in terms of making a name for ourselves in the Western music industry, Indian-Americans have been pretty absent until very recently. Why do you think people of Indian origin don’t show up more in music industries outside of India, particularly here in the US?

I don’t really think it’s a question of Indian or not; frankly, it’s very hard for anyone to make a name for themselves in the music industry, regardless of their background. There’s just so much competition and so many people out there trying to be the next big thing that it just becomes incredibly difficult to get noticed.

A lot of it also depends on what kind of talent you have and what kind of a sound you’re trying to bring. What I mean is that artists get asked “is your music something that would appeal to a large audience or just a small group of people,” and labels obviously want to appeal to as many people as possible. For me, I’ve always been about making the kind of music that I would want to listen to. When it comes to the music I create, I always look for what speaks the most to me, and that’s the music that I get involved with. I get so much happiness from it, and that’s what I want to transfer to my listeners.

When people are listening to my music, I don’t really want them thinking about “oh she’s playing well” or “is she hitting the right notes?” I want them to experience the music; it should be about the emotions of the music, what kinds of feelings and thoughts it provokes, and the motivation with which the music is being played. So when I perform or play in front of an audience, that’s what I want them to take away, that experience of the beauty of music.

What artists and musicians do you look to for inspiration, either for your career or for the music that you produce? And what artists would you want to collaborate with one day?

Definitely the maestros of Hindustani music have been a huge influence for me because the core of my music comes from that classical tradition. And although I’m not a 100% classical music performer these days, I always look to classical Indian musicians for their depth of training and the elegance and beauty of their music. I learn a lot just from listening to them and how they play certain songs, ragas, and so on.

I’m also inspired by Anoushka Shankar, in terms of the kind of music she’s been putting out and her albums as well. Her music is a fusion of Indian classical with more modern genres. One of the albums she released recently – not the most recent one, but the one before it – had her collaborating with a flamenco musician, and that was just amazing.

In terms of musicians that I’d like to work with – I honestly don’t know, there are just so many great ones out there. Well, Anoushka Shankar would be great, I’d love to get the chance to work with her. I like finding new musicians and collaborating with them, and there are a lot of very talented people all over the place, especially in New York. So it’s really all about finding people and putting different sounds together, using Hindustani classical as a kind of base to launch all these other incredible types of music.

Below is a clip of Raj and Christylez Bacon performing “Bhairavi Beatbox,” one of the tracks on her upcoming album, “Exit 1”: