Tragic end to a mystery. 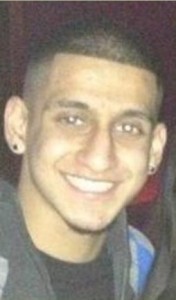 WSIL-TV, the local ABC News affiliate in southern Illinois, is reporting that the boy’s body was found in an abandoned area off of Giant City Road in the same city where SIU is located. The area, located between a Buffalo Wild Wings restaurant and Kohl’s store, is located about 2.5 miles from the SIU campus; Google Maps indicates that the distance is about five minutes away via car, and approximately 50 minutes on foot.

Details regarding who found the body and how it was found remain scarce. Police forensics teams have not yet determined nor revealed exactly how long the body had been in the field, leaving several gaping holes in the mystery of what exactly happened during Varughese’s unfortunate final hours. His disappearance last Wednesday night has already left the local SIU community reeling, but news of his demise is sure to devastate his family, friends, and the southern Illinois community.

Varughese’s last known communications with anyone were a pair of tweets he posted shortly after 11:00 PM on the night of February 12, indicating that he may have been in a fight, and a call he placed to a friend at around 12:30 AM the same night during which he sounded out-of-breath and indicated that an altercation may have taken place.

Family and friends have scoured the entire Carbondale area over the last six days looking for any sign of Varughese, who was officially reported as missing by his 20 year-old sister Priya on Thursday. Just yesterday, his family offered $15,000 in reward money for anyone who could offer information leading to their son’s discovery.

Varughese was last seen at an off-campus party wearing a red t-shirt, jeans, and was unshaven. Memorial services are likely being planned for the young man, although no official announcements have been made by the family. SIU will likely be extending counseling services for students coping with the loss of their friend and fellow classmate.

UPDATE – 3:15 PM 2/18/14: Local law enforcement held a press conference on Tuesday to share some more details regarding the Varughese case. Statements given to police indicate that Varughese was on his way back from a party and was possibly offered a ride back to his townhouse. Police say the individual who gave Varughese the ride came forward of his own volition on Monday night, and police are pursuing all possible leads. Police are NOT considering this to be a homicide investigation, as Carbondale Chief of Police revealed the current speculation is that Varughese may have been unable to indicate where he lives to the person who gave him a ride, was dropped off somewhere, and then froze to death in the cold that night. Police could not answer whether or not alcohol or drugs played a part in Varughese’s death, saying they are waiting on toxicology reports. SIU announced that a memorial service is being planned and a moment of silence will be observed throughout campus tonight.