78% Indians have favorable opinion of Modi.

WASHINGTON, DC: A new survey released by the Pew Research Center intimates that the upcoming Lok Sabha elections in India may end with the Congress party seeing one of the largest political defeats in Indian electoral history, and the Bharatiya Janata Party (BJP) in power. 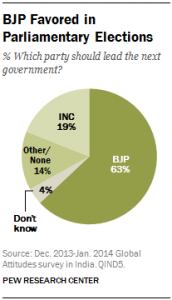 Seven out of ten Indian citizens polled said that they are dissatisfied with the current state of their country, with about 63% saying that they would much rather see the BJP should lead India’s next government instead of the incumbent party, the Indian National Congress. Only about 29% of Indians are fine with the status quo in the country currently, and the BJP proved to be consistently the most popular across all demographics polled: men and women of al ages, those with college degrees and those with just basic education, those in urban and rural areas, and those with all levels of income.

The poll also indicated that about 78% of Indians have a favorable opinion of Narendra Modi, the BJP’s Prime Minister candidate who has drawn both adoration and criticism from all around the world, with only about 16% of those surveyed saying they have an unfavorable opinion of him. Meanwhile, Congress Party candidate Rahul Gandhi polled only a 50% approval rating, with an unfavorable rating of 43%, nearly three times that of Modi. When asked if they are “very supportive” of either candidate, 60% answered yes for Modi, while only 23% answered the same for Gandhi.

The BJP is seen across-the-board as being the desired choice to fight India’s biggest problems, including political corruption (56%), creating jobs (58%), ending political deadlock (47%), and helping the poor (54%), among other criteria. Geographically, the BJP has the most tremendous amounts of support in the far north and south, where 74% and 69% of those polled, respectively, said they support the party. The east had a BJP approval rating of 57%, while the west – which includes Modi’s home state of Gujarat, of which he is the Chief Minister – had a 54% approval rating.

The Pew Research Center polled 2,464 “face-to-face” to conduct this survey, in states and territories that “are home to roughly 91% of the Indian population.” The survey was conducted between December 7 of last year and January 12 of this year, with a margin of error of 3.8%.

To read the entire report, complete with added figures and infographics, you can click over to the Pew Research Center here.