“Waiting for 2042” is insightful, satirical, hilarious.

WASHINGTON, DC: Stand-up comedian Hari Kondabolu is gearing up for the release of his debut comedy album, “Waiting for 2042,” expected to hit shelves and digital marketplaces on March 11. 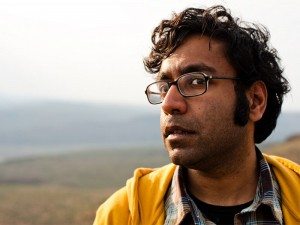 The talented Indian American is originally from Queens, New York, and holds degrees in comparative politics from Bowdoin University and a master’s degree in human rights from the prestigious London School of Economics. He segued into a professional comedy career just a few years ago, and has already made a splash on television shows like “Conan,” “Jimmy Kimmel Live!” and “Totally Biased with W. Kamau Bell.”

The American Bazaar was provided with an advance copy of Kondabolu’s “Waiting for 2042,” which finds the comedian at his sharp and satirical best. Tackling everything from American racism to why his favorite childhood bands seemed to have died out, Kondabolu’s album is insightful, profane, but most importantly, hilarious.

In an exclusive interview with The American Bazaar, Kondabolu talks about his decision to do an album rather than a DVD or Netflix Special (a la fellow comic Aziz Ansari), why he decided to go into comedy after getting degrees in such a wildly different field, and what it means for him to be a Telugu American on the rise.

You’ve done stand-up comedy for several years now but this is your first comedy album — what was the reasoning behind wanting to release an album of your work?

I think it’s important for standups to create recorded work to document chapters of their careers. I’ve done a half-hour special on Comedy Central and a bunch of TV sets, but this album was something I had complete control of. I had a vision for what this work of art could be and I feel proud of what I produced.

Comedy albums were big in the mid-to-late-1900s, with several comedy greats like Eddie Murphy establishing their careers from comedy albums. Then DVDs of comedy specials became the new wave, with comedians as recently as Kevin Hart making a name for themselves through concert movies like Let Me Explain. Why did decide to go back to a comedy album, as opposed to a DVD or a stand-up tour? What is about the album format that appealed to you?

I really love listening to a standup’s audio recordings. I remember being 19 or 20 listening to Dave Chappelle’s Killin’ Them Softly on a CD a friend burned for me and I had no idea that it was originally a Showtime special. In fact, the jokes were so funny that I actually got disappointed when I finally saw the special. Not to say it wasn’t still brilliant, but his descriptions of things were so amazing that whatever my imagination created was impossible for reality to match. I wanted to create something as well that was strong enough without a visual component and that painted funny pictures even without me there to physically sell them. Also, recording audio is a lot less stressful than dealing with cameras and all that comes with video production. I just wanted to do a couple of shows in Oakland and see how they turned out. It doesn’t matter what I wore or how I looked. If you’re curious I wore a green button down shirt with epaulettes and my hair looked fantastic.

You have a B.A. in comparative politics and a master’s degree from the London School of Economics, yet you chose stand-up comedy as your career — talk a little bit about how you came to that decision? Was it something you thought about for a while or just dove into head-first?

I definitely didn’t dive head-first into this career. I don’t really dive head-first into anything. I generally make painfully slow and thoughtful decisions. Comedy was never something I thought I could do as a career, but I loved writing and performing and did so through college. When I worked in Seattle as an immigrant rights organizer from 2005-2007, I did comedy at night in what was a very good, young standup scene. And it was during that time I got discovered by the HBO Comedy Festival, appeared on Jimmy Kimmel and got a manager. I also got into a Human Rights Masters Program at LSE and decided to get my Masters before making any future decisions and at the end of that year, I knew that I missed doing comedy and doors were open for me that I didn’t think would ever be, so I went for it.

Any entertainment field is obviously very difficult to make a name for yourself in, but stand-up in particular has so many aspiring comedians all vying to be the best. What were those first few years of doing stand-up like? What was your “big break,” and how did you come up from obscurity to where you are now?

I started doing comedy in high school and then in college, mostly for my classmates at open mics. I took it as seriously as I could, given minimal stage time and the fact I had a full academic workload. I would do open mics in New York on breaks, but those were usually brutal with only a few minutes to talk and I often had to pay a few bucks to perform or bring people with me. I hated it. It was really Seattle where I really got to learn the craft and take risks and perform for an audience who was excited to see me. Those were incredible years.

My big break was getting to perform at the Bumbershoot Music and Arts Festival in Seattle in 2006. J.P. Buck, who was booking the HBO Comedy Festival, saw my name listed on the Bumbershoot website and got in touch with me after he saw some of my stuff online. I started sending him more video of my standup and eventually auditioned for and got a spot at what was then a huge festival for discovering new talent. It all started there.

What comedians do you get inspiration from, in terms of how they may have shaped your style of comedy or the kinds of topics you talk about in your stand-up? Which of your contemporaries’ work do you follow, and are there any that you see yourself having similarities with in terms of style?

Stewart Lee and Paul Mooney are definitely the two comedians who influenced me the most.  Their comedy taught me to be honest and take risks with my material and with the form.  In terms of contemporaries, W. Kamau Bell is both a great friend and a mentor and his output inspires me constantly to work harder. Also, he’s courageous on stage and reminds me what I’m supposed to be doing up there.

Your bio says that your parents are of Telugu origin; Telugu people have been making waves in all kinds of fields recently, especially with Nina Davuluri winning Miss America last year. Talk a little bit about your thoughts on Telugu people making a name for themselves in different parts of the entertainment field?

Growing up I’d tell people, even other Indians, that I was Telugu and they would have no idea what that meant. Punjabi they’d know, but being Telugu didn’t mean anything to others and that was frustrating. I’m proud of who I am and if being successful allows others to have an easier time being proud, then that’s wonderful.