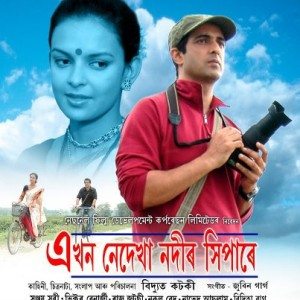 The film is an Assamese-language political thriller, and stars Sanjay Suri, Raj Zutshi, Preeti Jhangiani and Bidita Bag. It screened on the final day of the two-day festival, which took place at Duke University. Produced in 2012, the film is expected to also screen at the upcoming 14th annual New York Indian Film Festival, which will take place on May 5-10.

The film tells the story of Sridhar Ranjan, a social activist who goes missing for nearly seven years from Majuli, a city in Assam. His journalist friend, Abhijit Shandilya (Suri), sets out to find him, and discovers an underground network of terrorists and the possibility that Ranjan’s disappearance may not have been a random, inconsequential event. Teaming up with a Mumbai tour guide named Sudakshina (Bag), Shandilya works to get to the bottom of the mystery.

This is not the first time Ekhon Nedekha Nodir Xhipare has been recognized for its artistic excellence. Earlier this month, Kotoky won Best Screenplay at the Assam State Film Awards for his work on this movie, and the film won Best Screenplay and Best Actor at Washington DC South Asian Film Festival last May. It was produced by the National Film Development Corporation of India, which generally chooses to fund socially important films and which gives out the annual National Film Awards, arguably the most prestigious awards for film in all of India.

Ekhon Nedekha Nodir Xhipare has also been the subject of controversy, however. The very same National Film Awards rejected the movie as Assam’s submission for the best Assamese film of 2012, because it contained a “lack of cultural purity.” A court case was filed against the National Film Development Corporation for dismissing the film, but it was revealed that the reason was really because most of the film was shot in Mumbai and contains largely Hindi dialogues.