Gujarati roots don’t hurt at all, if Modi comes to power.

WASHINGTON, DC: Just one day after US Ambassador to India Nancy Powell announced that she would retire in May, reports have surfaced that the US is already grooming her replacement: Rajiv Shah, the current head of the US Agency for International Development (USAID). 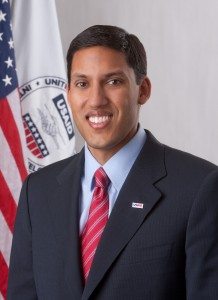 Shah, 41, has been the agency’s 16th Administrator since 2009, and is a native of the US, having been born in Ann Arbor, Michigan. What makes the possibility of Shah becoming the country’s next Ambassador to India all the more likely, however, is the fact that his parents are from the Indian state of Gujarat, just like BJP Prime Ministerial candidate Narendra Modi, who polls suggest could well become the country’s next Prime Minister.

RELATED STORY: US Ambassador Nancy Powell to retire in May amidst speculation that she is impeding relations between US, Modi

Modi’s disapproval of Powell is cited as one of the major reasons she either willfully resigned or was forced out by President Barack Obama’s Administration. In an effort to mend ties with the Indian government, and appease its likely new Prime Minister, the White House would do well to institute an Indian-origin Ambassador, and one who has Gujarati roots, to boot.

The State Department, however, has refuted claims that Powell was driven out of the position by political pressure, telling reporters that her sudden resignation, just one week after speculation arose Powell may be shifted as a political move, is “in no way related to any tension [nor] any recent situations.”

“There’s no big behind-the-scenes-story here,” said State Department Deputy Spokesperson Marie Harf. “I want to dispel any rumors out there that this is related in any way to anything besides her long-planned retirement.”

Shah has had a successful career in the political sphere even before his time at USAID. He has served as both the chief scientist and as the Under-Secretary for Research, Education and Economics for the US Department of Agriculture (USDA). During his time with the USDA, he also created the National Institute of Food and Agriculture, which has played a key role in spurring agricultural growth and research.

Before that, he spent seven years at the Bill & Melinda Gates Foundation, working as the Director of Agricultural Development in the foundation’s Global Development Program, and as its Director of Strategic Opportunities.