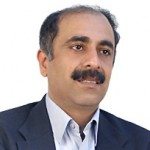 NEW DELHI: The world’s largest democratic process involving over 1.2 billion people, with over 810 million of voting age, is right now going on in India. The frontrunner in this election is Mr. Narendra Modi, candidate of the Bharatiya Janata Party (BJP), a party which has been sitting in opposition for the last ten years.

Though there are another four weeks of high voltage campaigns and voting before the results will be known on May 16, all opinion poll agencies in India are projecting that Modi’s party shall obtain at least just sufficient parliamentary seats, in a coalition, to become the ruling party in India.

The next government in India will face a public unlike any in the past. If Modi becomes the Prime Minister, he will have to lay the roadmap and deliver results on a range of key and urgent matters facing the country. He will also have to devise an efficient onboarding strategy for himself and his new teams that will now hold the levers to navigate the nation.

All of above will happen under the immense glare of expectations, 24×7 media, and guerilla tactics of vested and monied interests, political opponents, or criminal elements many of whom may suddenly realize they are facing immediate self-harm. On the other hand there will be legitimate self-interest groups clamoring for attention – with each group claiming its own merits. And within each group, there shall be sub-groups each competing and presenting their laundry wish lists.

Soon as the final results are known on May 16, a massive operation will swing into action in India.

While the nascent government will still be smelling the coffee that is brewing, it will also have to work immediately to prepare, submit, and get parliamentary approval of the annual budget of the country that must be ratified by July.

Any election brings a change in the agenda, policies and personalities. However this election may transform India, its government, and the culture of governance in a manner that may be unprecedented. Perhaps the only analogy of such a shift could be the change in government in 1977 when the Indira Gandhi led government in India suffered an inglorious defeat due to the ill-advised Emergency that it had imposed in the country.

Once the winner is announced, there will be a rush of requests or demands asking the next government to declare what it will do in the first 100 days. If the winner is Modi, these questions will be even more, and expectations higher. In this period Modi will also have to manage his own onboarding, the onboarding of his ministerial colleagues and advisors, and start tending to affairs of the state.

The first public discussion about a leader’s 100-day agenda was probably in the 1930s when President Roosevelt’s actions and success in delivering his 100-day agenda captured the imagination of United States. Since then, however it is equally likely that many world and regional leaders have ended up eating crow on the 100th day if some saucy analyst discovers some spicy question that got totally neglected in those 100 days. There can also be developments in these 100 days that overtake other priorities once the leader assumes office, sits on the chair, and makes the first official phone call.

Already there are calls from Indian industry for a 100-day agenda for the next government, advocacy for a check list of steps in first 100 days from the banking and finance sectors, and curiosity among foreign governments and investors about “What will Modi do in the first 100 days?”

Such calls for Modi to define an immediate check-list are very understandable and of course very important. Such questions perhaps arise from and due to the era and milieu in which we live. We want easy, quick Twitter sized answers to satisfy our curiosity. However, given the age of twittering and instant gratification, and nano-second media-amplification we the publics are also very flippant. Modi should beware of this.

Any stable government is elected for 5 years in office – 1825 days. By focusing too much on this fascination with a check list for the first 100 days, we send a message that the remaining 1725 days may not be as dynamic and full of energy as the first 100 days. A government must perform equally hard every day – all 1825 days.

A leader must expend his political capital very carefully – especially in the initial days of his administration. Even if Modi comes with redoubtable electoral and emotional support of Indian voters, he will need to set the right level of expectations and measurable deliverables to continue building his leadership and legacy. Changing the course of a nation and bringing visible change takes tens of years.

A leader must be careful of his image. He must perform first. And then report. But, report he must. Let the medium, the performance, be the message. Let the new government, deliver its message through its performances rather than wasting time in making half-baked plans to oblige pressure groups.

Modi must adhere to PR

The Oxford dictionary helpfully describes “PR = Public relations”, and offers the example, “Public relations:we did a lot of PR and mounted a big advertising campaign”. To further help us understand PR, Wikipedia tells us that “Public relations (PR) are the practice of managing the spread of information between an individual or an organization and the public.” Thus the prevailing narrative about PR seems to convey that PR is about image strategies, media management, positive news stories, public events, advertising fluff, and much else.

I am grateful to a dear friend and mentor, Ven Parameswaran of Scarsdale of New York for teaching me a profound lesson about public relations and image making – that PR is none of the above.

My learning, a Eureka moment of sorts, came when once Ven lectured me, saying, “Robinder, PR is not PR as many people think. Real PR is an abbreviation of “Performing” and “Reporting”. So, if anyone wants to build an image, he should first “Perform” and then “Report”. But of course make sure that you “report” using all resources in your repertoire so that the whole world knows about what you have performed – and that is what makes your image.”

If Modi assumes leadership of India, he should look at PR through this prism of “performing” and “reporting”. He must hunker down, and start performing. And he must keep reporting to the people of India over the next 1825 days as and when he delivers or crosses a milestone.

(Robinder Sachdev is a global thought leader in opto-politics.The author defines opto-politics as the phenomena beyond geo-politics. In addition to the reality of geo-political, and geo-economic, forces, world affairs are increasingly being shaped by the images, optics of these forces. Opto-politics is the interplay of images and geopolitics.)