WASHINGTON, DC: Jewelry and accessory design Puja Bhargava Kamath is the mastermind behind a new crowdsourcing initiative called the Indian Jewelry Project (IJP), in which people of Indian origin from all over the world can send in photographs of their favorite jewelry, along with a short story or write-up about the significance of that particular item.

Originally from New Delhi, Kamath did her schooling at India’s National Institute of Fashion and Technology (NIFT). She spent several years working in India, first in New Delhi and then in Bangalore, and even opened her own line of boutique silver jewelry, called Lai.

She came to the US last year, settling down in the San Francisco Bay Area, with her husband. It was during her time in the US that she came across the Indian Memory Project, a crowd sourced operation that invited Indians worldwide to send in their mementos of Indian culture as a way of sharing, preserving, and celebrating their culture.

“That’s what got the idea started on IJP,” Kamath explained, in a phone call with The American Bazaar. “Jewelry is something that has a lot of value, not just in terms of money, but memories, and what each piece means to the person it belongs to. I thought it would be very interesting to hear these stories from Indian people.”

Thus, the IJP was born in February. With a Facebook and Pinterest page, Kamath began inviting submissions, of which there have been roughly 20 so far. By doing this, Kamath was able to combine her two passions, jewelry and history, into one massive project that can trace the history of Indian culture through the beautiful pieces of art that have adorned Indian women for centuries. 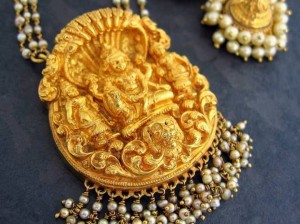 “I’m a big history buff,” said Kamath,” and obviously jewelry is very important to me, too. I like antique, vintage jewelry, and when I saw the Indian Memory Project, it just struck me how wonderful it would be to have an online archive of these pieces of jewelry. Jewelry is so often handed down from generation to generation that certain pieces have an entire history of their own, and I like the idea of sharing that.”

What excited Kamath the most, however, is that because it’s crowd sourced, the IJP is driven by people.

“People are contributing, and they’re really driving it,” she said. “We haven’t done any kind of advertising or Facebook [ads] or anything like that. People have found out about us and willingly submitted their pieces and stories to [IJP], and that’s really great.”

Kamath admitted that growth has been somewhat slow, as three months have gone by with only around two dozen published entries, but the quality of work is encouraging. While some submissions have had to be edited or disregarded – one submission, Kamath explained, had a beautiful narrative about earrings worn by the person’s relatives, but the jewelry could barely be seen in the accompanying photograph.

Kamath has some relatively modest goals for the IJP.

“I don’t know what kind of an ‘impact’ I hope it has, that word is a little too big!” she said. “I really just want us to have the quality and quantity of work that we qualify as an archive of historical importance, so that what we establish has some lasting importance for Indians.”

Kamath observed that the people who have been most responsive to the effort have been Non-Resident Indians (NRIs). She speculated that the reason for this was likely because they have less of a connection with their heritage as a result of not living in India, and are, therefore, keen to preserve whatever little of it that they can.

Those interested in checking out the IJP can do so on its websites: https://www.facebook.com/ijponline andhttp://pinterest.com/ijponline.