CEO Patel (23), along with co-founder and COO Dan Otto, founded Zairge in order to simplify hotel property management systems. By using cutting-edge cloud-based technologies, along with newer hardware like tablet computers, Zairge can streamline the entire interaction between a hotel and its customers.

As the only child of hotel owners in Virginia Beach, where he was raised, Patel was exposed to the hospitality industry from a young age. Through helping to manage the properties while growing up, Patel came face-to-face with how difficult and flat-out inept these widely used property management systems often are.

“It didn’t take long to realize that the current ‘state-of-the-art’ software being used in the industry was archaic, inefficient, and just plain clunky,” Patel told The American Bazaar. “It took forever for any one individual to figure out how to use [these] systems, even after weeks of training.”

That’s when Patel got the idea to change how his own family did business, by implementing a cloud-based management system that they could use on their own properties. But then it occurred to him that if they were having issues using these industry-standard systems, there was a very good chance that plenty of other hotel owners around the nations were, too.

And thus, Zairge was born.

A computer science major from The College of William & Mary – a leading university, located in Williamsburg, Virginia, that has educated political comedian Jon Stewart, Super Bowl-winning coach Mike Tomlin, and three US Presidents – Patel teamed up with Otto, his friend and freshman roommate, to create the business model and technologies necessary to get the project off the ground.

Together, the two devised a simple three-pronged approach to what Zairge can do for hotel properties that adopt it.

Hotel guests can check-in to the hotel with minimum fuss, if they so choose, using tablet computers available in the hotel lobby. Hotel employees can do their jobs from practically any location on the premises, no longer having to be permanently tethered to their desk at the front of the hotel. And, perhaps most importantly, owners and managers can use Zairge technologies to view real-time analytics and transaction details – from anywhere they want.

“The whole idea is to streamline the communication for every aspect of a hotel, from the guests, to the employees, to the owners,” explained Patel. “Instead of having everyone stand in line at the peak of a hotel’s busy season, guests can relax at the hotel bar as a receptionist walks up to them to allow them to check-in. Or, guests can complete the majority of the check-in process by themselves, and all they need from the receptionist is their room key.” 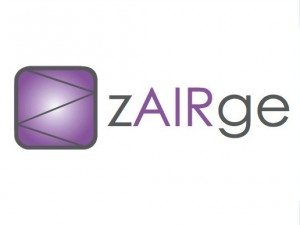 “Our business model is predicated upon the idea that information and efficiency are two of the greatest competitive advantages we can offer a property owner,” Otto explained. “As Zairge continues to expand upon its modular services and broaden its feature set, it has the growth potential and durability to unseat the current state of the industry software as the best option for modern property management.”

The idea has caught the eye of several hotel properties around the country, which have signed on to a pilot program that will allow Zairge to test a beta version of their offerings. Currently, the entire Zairge team – consisting of Patel, Otto, and three fellow William & Mary students – has set up shop on Wall Street, where they’ll spend the summer as part of the prestigious DreamIt Ventures’ tech accelerator program.

“We already have several properties lined up for beta testing and we anticipate a product launch before the end of the summer,” said Otto. “Properties that have expressed interest in our software range from mid-level independent properties to large, upscale resorts. Our software caters to the needs of all hotel tiers and offers powerfully simple solutions at a competitive price.”

Mere days after earning their undergraduate degrees, Patel and Otto are well on their way to establishing what could be one of the hottest start-up ventures of 2014. By pushing new technologies alongside intimate knowledge of what improvements need to be made to administration of hotels and motel – roughly 50% of which are owned and operated by Indian Americans – Zairge is poised to take the industry by storm.