Actor Ravi Patel plays himself, his sister Geeta, is the director.

WASHINGTON, DC: A new documentary entitled ‘Meet the Patels’ is a humorous and incisive look at the Indian custom of arranged marriages in today’s day and age. 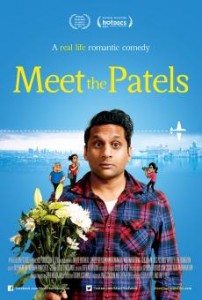 The movie centers on the travails of real-life Indian American actor Ravi Patel, who is perhaps best known for his blink-and-you’ll-miss-it role as a stereotypical desi call center employee in the 2007 mega-hit Transformers. In Meet the Patels, Ravi accompanies his parents and older sister, Geeta, as they go to India to try and get him hitched up with a life partner.

Ravi ends up meeting scores of women, and along the way, tries to find a way to reconcile what his parents want him to do, and what he feels he must do in order to find someone that he can actually spend the rest of his life with. On top of that, he must mend a broken heart that is still recovering from the break-up with his previous girlfriend, a relationship with a non-Indian girl that he kept from his parents for several years.

But, as Ravi told the Wall Street Journal, the film is more about his journey of getting in touch with his heritage rather than his pursuit for love. And for Geeta, who directed the documentary, the film is partly autobiographical as well. Now, both siblings are hoping that the documentary strikes a chord with American audiences.

So far, the reception has been positive. Meet the Patels garnered strong reviews when it screened at the Toronto’s Hot Docs Canadian International Documentary Film Festival in April, and was screened at the 20th annual Los Angeles Film Festival this past weekend. The Wall Street Journal reports that lines to see the movie were wrapping around the theater – a rare sight in this age of Fandango and online ticket reservations – and the trailer for Meet the Patels was the most widely seen of all the documentary entries.

Can Meet the Patels appeal to non-Indians? If there’s anything Hollywood has taught us over the last five years, it’s that Indian-centric stories are no longer box office poison, and Meet the Patels, despite being a documentary, has as good a chance as any at being the surprise sleeper hit of the 2014 festival circuit.

The trailer for Meet the Patels can be viewed below:

MEET THE PATELS Trailer – 1.5 mins from 4B Pictures on Vimeo.