Pride of the Indian Navy, scourge of the Portuguese invaders. 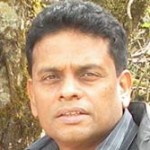 BADAGARA (KERALA): I stepped into a virtual battlefield that was once soaked with blood, deceit and courage. Almost 400–years-ago this was the terrain, as beautiful as ever, where the famed ‘Malabar Pirates’ roamed and ruled dealing with the Portuguese attackers with impunity and sending them back again and again into the sea from where they came from until greed and stupidity of the local rulers — the same old story – allowed the forces of colonialism make inroads into India.

Looking through the half open massive gates with the sword and shield insignia emblazoned in bronze on black cast iron door, I could almost feel the presence of the country’s earliest naval heroes—the Kunjali Marakkars—there were three of them, some say four—who led the first successful defense of India’s coast against a European sea power. And one of the little known facts is that former President APJ Abdul Kalam traces his origin from the Marakkar family.

Pushing the  giant gates open, I was at once treated to a stunning view of a well-kept garden with bright exotic flowers, a porch and a handsome cottage where one of the Marakkars lived and fought in the halcyon days of Zamorins—or Samoothri—the rulers of Malabar.

Mohammed Kunjali Marakkar (also known as Kunhali Marakkar) was the Muslim naval chief of the Samoothri Raja Manavikraman, a Hindu king of Kozhikode (anglicized to Calicut) in 16th century Kerala. He was the first of the four Kunjalis who played a part in the Raja’s naval wars with the Portuguese who arrived in India in 1498. The Marakkars are credited with organizing the first naval defense of the Indian coast.

Nearly 100 years later the third Marakkar had nearly shaken off the foreign rulers. But a twist of fate changed the scenario in favor of the firangis as the shortsighted Zamorin joined the Portuguese against Kunjali. By 1600, the stage was set for the end-game. The Zamorin attacked from land with an army of six thousand and the Portuguese bombarded from the sea. Left with no choice, the Kunjali Marakkar surrendered to Zamorin on a solemn promise of pardon.

The next thing Kunjali knew was being dragged by chains, his body bleeding profusely from the beatings. Screams and wails of women and children could be heard in the background, but Kunjali and his band of trusted followers were oblivious – it was not as if they could do something about it. Some were already dead and the others were half dead. In Goa, the Portuguese first nurtured Kunjali to full strength. Then the screams could be heard all over Goa as he was dismembered piece by piece, starting from leg upward. Later, the body pieces of Kunjali and his followers were mixed and hung around – a lesson for those who dare defy the imperial order.

As I stood on this rural village of Kottakkal named after the construction of a Kotta(fort) by Kunjali Marakkar III, the third descendant in the chain of hereditary admirals of the Zamorin I could not help wonder how the little known naval hero confronted the might of the Portuguese   almost 400 years ago plotting and waging battle after battle from this spot.

Yes, these peculiar geological features of this place might have influenced him to select this spot to construct the fort. The peninsular shape that protrudes to the sea on one side and the river Kottappuzha (also called Moorad) on the other side made it a strategic point for him to execute his hit-and-run tactic against his enemy – the Portuguese.

I imagined small ships (or destroyers of today) anchored in the river mouth that would have silently but swiftly snaked into the sea and give that decisive blow to the passing enemy and exit before receiving a counter attack. In addition to that, the proximity of both Iringal Para, a massive quarry with a high altitude and Velliankallu amidst the sea, served as surveillance centers for the early detection of the movement of the enemy.

Now all is left is the structure developed into a museum to exhibit the belongings of the country’s most wily naval tacticians. Cannon balls, swords, shields and daggers which have been dug-out from the surrounding areas are on display in this traditional structure.

So is the spartan house of the Marakkars, a title given by the Zamorin, that hastraditional red-oxide flooring smoothened with use. I noticed that the house was just functional with some robust aesthetics thrown in the form of glazed walls and a 7ft by 4 feet stone bed in the verandah on the sprawling floor.

‘’In a span of 100 years from roughly 1500 AD to 1600 AD there were three Marakkars by the same name. It was Kunjali Marakkar two (II) who handed out a sound bashing of Portuguese, one of the best naval forces of the time. And his descendant Marakkar three (III) resisted the European force from making inroads via the sea until he was overpowered by deceit and  killed,” Putheeyaveetil Basheer, whose family has been living in Kuttichira for centuries, told The American Bazaar.

After the defeat of Kunjali, the same joint forces razed the fort to the ground. However, a thatched structure remained, surviving the destruction. It is believed that it is the ancestral home where Kunjali lived. It came under the patronage of the government only in the year 1976. The structure, on the verge of dilapidation, and the adjoining 19 cents of land, was taken over by the government from four heirs, and entrusted thereafter to the Department of Archaeology.

It is told that the last descendant didn’t have any direct successor since he had no children. The relatives who were in possession of this structure were not able to undertake the yearly thatching after the introduction of Land Reforms Act. As a consequence of this social reform, the rent they received either by the form of money or coconut leafing for thatching from the tenants, abruptly stopped. So unable to withstand the torture of heavy rains, portions of this large house began to collapse during the course of time and the present portion remains here to accept our tributes.

Coming into the possession of the government, a compound wall and an outhouse were built and a watchman was appointed. After that the renovation work was undertaken in the year 1998. The thatched roof was exchanged for a tiled one and the granite compound wall to a laterite one to match the Dravidian style architecture of the structure and electric lights were installed. The then minister for culture, T.K. Ramakrishnan, commissioned the work on September 10th in the same year.

More area was added to the plot by acquiring the adjoining land, using the fund of Payyoli Grama Panchayat in the year 2000. A boat jetty and a felicitation center were built on the river bank about 160 meters away from the structure and a connection road was laid as part of the execution of Kunjali Marakkar Tourism Project, utilizing Block Panchayat fund. An additional building was built and now a portion of this building is fabricated into a museum to exhibit the belongings of the naval hero.

A site near the monument, where the massive Iringal quarry had existed, which served as a surveillance center for Kunjali, was acquired and a building was constructed there to function as an information center. The main concept was a heritage village on this wide area of 22 acres of land and operation of cruise services from here to nearby centers of tourist interest like Kappad beach and Velliyankallyu through the sea, sandbanks and Peruvannamoozhi through river, constructing a boat jetty on the side facing the river. The spot is also a slice Malabar’s intensely beautiful country-side – a tourist’s delight to say the least.

Now a bonus for the traveler—en route to the famous Kunhali Marakkar house, mid-way between Calicut and Badagara is the Elathur River or as the locals calls it Korapuzha. A typical palm fringed, sleepy hamlet thrown in the midst of this stunning picture postcard scenic surrounding had once bristled with activity as the many ships of the Zamorins navy and those by the Marakkars too, were built here. You also stop here, as I did for frothing, hot tea while you watch the fishermen haul their shimmering catch across.

Also, as you go further north from the Marakkar house situated in Badagara or Vadakara, is the beach which has a tongue twister of a name—which even the Malayalees find it difficult to pronounce—the beautiful and enchanting dreamlike Muzhuppanangad beach. This is one of its kind in the Asian continent, as it boasts of the only natural drive-in beach wherein you can take your vehicle right deep inside where once the blue expanse of the ocean stood and the water had receded with tide and probably do a wheelie.