The speech is over, and the prime minister is leaving the podium.

Grand announcement: “all PIO card holders to get lifetime visa, they will not have to report at police stations in India anymore, if on an extended visit to India. All PIO and OCI cards to be merged.” Huge applause.

Long term visas for Americans and visa on arrival for them soon.

“Gandhi also lived abroad; he came back to India in 1915, next year marks 100th year of that visit.”

“Gandhi gave us independence… So on the 150th year of Gandhi’s birth anniversary, in 2019, we want to give a clean India for him.”

Crowd on their feet when he says he became the prime minister by selling tea, will work for small people. He says he thinks of doing big things for small people – by building more toilets in India. He has been saying this everywhere, at the UN and a meet at the Central Park on Saturday. Got him a huge response every time.

The English translations on giant screen is not great. Modi says now all Indians in America feel they should keep one foot in India. Translation: all Indians want to stay in Gujarat, in India.”

Now another quip, to loud applause: “since I took over the responsibility of PM, I have not taken vacation for 15 minutes. Some of the Democrats in crowd must be squirming think of the number of vacations Obama has taken. Was that an intentional dig at Obama?”

Modi’s best quip so far: “our ancestors played with snakes but now India plays with a mouse when asked in China years ago if India was still a country of snake charmers.

Modi has already met all the US elected officials in the morning. 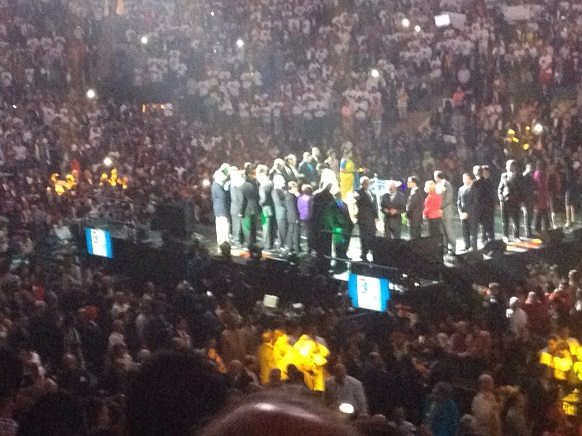 Chants of “Modi, Modi!” as all the legislators wait on stage for Modi to come to join for Indian national anthem. Everybody in crowd also standing.

Loudest cheer for Gov. Nikki Haley. And for Ami Bera and Tulsi Gabbard.

Haley looks businesslike in a jacket and knee length skirt.

Loud boos from the crowd as emcee Hari Sreenivasan announces that Gov. Bobby Jindal could not be here but sends his best wishes.

When Prime Minister Modi walks in, these balloons in the colors of the India flag will descend from the ceiling.

At the topmost tier on the 9th floor. MSG is the home of the Knicks. Their championship banners overlook the stage, where dancers in resplendent costumes make their moves to the song Malang from Dhoom 3. I’m trying to identify a dancer who moves closest to Katrina Kaif but the dancers change their moves to a folk number. It’s fusion at Modi Mania.

A lovely looking Nina Davukuri introduces the artists rendering the cultural programs as in between performance chants of “Modi, Modi, Modi” render the air.

On giant screens, there is a flow of tweets from Indians inside and outside.

#Modi in America . Unity . Action Progress. Theme on the giant screens. Synchronizes with a laser show and images from Google Earth.

Inside there is huge excitement near the lower tier people where people suddenly get up and chant “Modi, Modi, Modi” as they think the PM has arrived.

Swagat restaurant has played a smart move; It has a man sporting its banner. My best: it’s going to be one crowded eatery around 2 pm

Outside the largest gathering are a group of anti-Modi protesters. The bunch of pro Modi supporters outside the entrance are more interested in hounding news camera crews.

The anti-Modi protesters are across the avenue at a corner of 7 th avenue.

I reached around 10 am. Surprise! Where are the hordes of Indians standing in line? The bunch of Indians gathered at the main entrance on Seventh Avenue had a line shorter than people who gather for cabs outside on weekdays.

Turns out they are all inside.

Modi, Modi, Modi, that’s all I could hear as I walked from Grand Central to Penn Station and passed by fellow Indians. Some wore Nehru jackets.