BENGALURU: For professionals and entrepreneurs, there are three authentic sites that cater to networking needs.

LinkedIn: According to Forbes, “LinkedIn is, far and away, the most advantageous social networking tool available to business professionals today.” 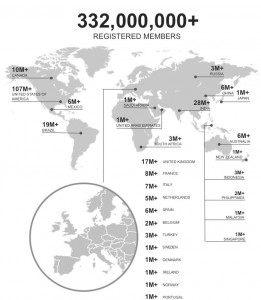 LinkedIn was officially launched on May 5, 2003 and by the end of its first month in operation, it had a total of 4,500 members in the network. Now it is the largest professional networking site with a registered user base of more than 332 million spread over 200 countries. According to reports, every one second, two professionals sign up to join LinkedIn.

India has the second largest number of LinkedIn users with over 28 million people only next to the US which has a total of 108 million users.

Viadeo: Viadeo is a professional networking site which has over 55 million registered users till 2013. According to reports, the user base of Viadeo is rapidly increasing at a rate of 1 million new users every month since 2009.

Viadeo was first named Viaduc, but when it began to expand to other countries, the company was renamed to Viadeo.

The target audience of Viadeo is mainly centred in France, but they are starting to build a strong hold in countries like India and China. Viadeo acquired China’s leading professional social network Tianji, founded by Derek Ling in 2005. In India Viadeo acquired ApnaCircle, one of India’s professional networking brand in July 2009.

Viadeo was founded in May 2004 by Dan Serfaty, a graduate of the HEC School of Management in Paris, and Thierry Lunati, a graduate of École centrale Paris. The Viadeo revenue system is based on 3 revenue streams: premium membership, advertising, and services to recruiters.

XING: XING is another professional networking site which has a user base of more than 14 million members worldwide and out of this over 7.7 million users are based in German-speaking countries.

XING was launched as OPEN Business Club AG in August 2003 by Lars Hinrichs in Germany as a German limited liability company. The company was renamed from OpenBC to XING on November 17, 2006.