Supporters of Pantaleo have tough time defending him.

NEW YORK: Two guest commentators on national television compared the death of Eric Garner, the non-indictment of the NYPD officer Daniel ‘Choker’ Pantaleo to Monday morning quarterback, a popular expression in football jargon to analyze the day after a game, discuss alternate options to force a different play and ultimate result.

The only result in poor Eric Garner’s case, however, was death, with aggressive, adrenaline rushed ‘touchdown’ by Pantaleo and crew. Sunday night football, or Monday morning quarterback, doesn’t make a difference.

For the record, Garner was killed on a Thursday, July 17th. 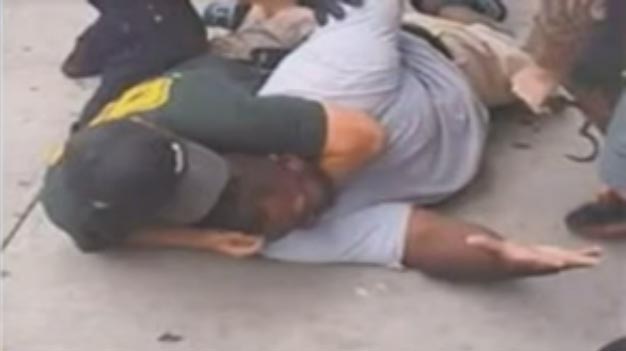 To denote a tragedy that hurts, infuriates national sentiment, cause irreversible, incalculable loss to American integrity, pride and independence, through a frivolous sporting term, is national shame.

The Garner moment is not to discuss the Ben Roethlisbergers and Tom Bradys of football, how they deceive, throw, are occasionally brought down. It’s time to seek accountability reforms of police units countrywide.

A quarterback’s job is to throw ball in the face of aggression by lithe, menacing, 200 pound men, who rush, with intent to maim. Ironically, going by the analysis by the two esteemed commentators, Pantaleo acted lawfully, his actions credulous. In reality, he rushed a defenseless, overweight, ailment-ridden Garner, a family man, father of six children, a breadwinner.

Garner was not a threat to society. The day he was killed, he allegedly sold loose cigarettes to make money, feed himself and his family. A man who had got onto the wrong side of the law many times, but never acted aggressively, rushed, charged a police officer. He was known in his family as a gentle man. Till he encountered Pantaleo – who rushed him fatally.

America is taking a deep breath. Sunday night football will go on, the Walking Dead cutting into their ratings or not. So will Daniel ‘Choker’ Pantaleo. Knocked down cold are all black people 350 pounds and below.

The proposed re-opening of the Rome Colosseum is for cultural events. The real spectacle is turning out to be in America.

Maybe, Pantaleo did prove a point after all.