WASHINGTON, DC: In 2014, the American public’s concerns were disjointed to a degree not seen since the turn of the millennium.

Perhaps expectedly, the government and politicians are identified as the nation’s leading problem by a slim margin (18%), according to a new Gallup poll. Second come complaints about the “economy in general” (17%), followed by unemployment or jobs (15%), and healthcare (10%). 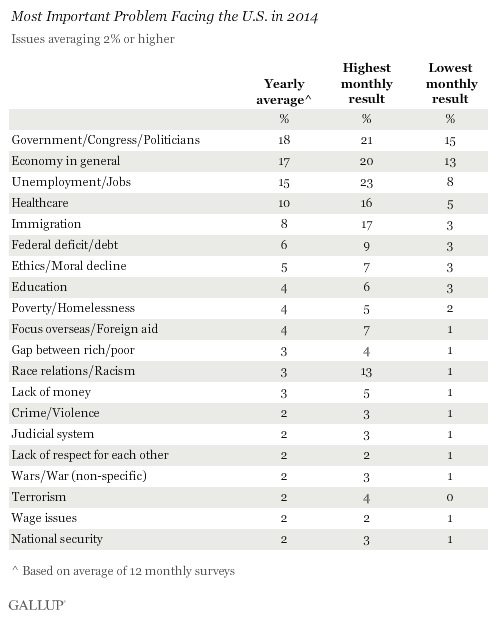 In addition to the top four issues, 8% of the American populace cited immigration as the nation’s most important problem, 6% named the federal budget deficit or debt, while 5% mentioned ethical or moral decline.

According to Gallup’s report, the plethora of trending issues were intrinsically tied to current events, which led to uneven attention throughout the year.

In particular, mentions of unemployment were consistently higher in the first half of 2014 than later in the year, reaching 23% in February. Also, race relations, usually mentioned by no more than 2% of Americans as the nation’s top problem, surged to 13% in December as recent legal decisions sparked protests nationwide against police treatment of blacks. Similarly, mentions of immigration spiked in July to 17% as thousands of undocumented children from Central and South America created a crisis at the southern U.S. border. But this is the first time since 2001 that no single issue averaged 20% or more for the year.

2014 was also the first year since 2007 that the economy wasn’t the greatest concern of America’s collective consciousness, as well as the first time disapproval of the government led the monthly polls.

The results are based on telephone interviews conducted with random samples of “approximately 1,000 adults, aged 18 and older, living in all 50 U.S. states and the District of Columbia,” totaling about 12,000 U.S. adults for the entire year.