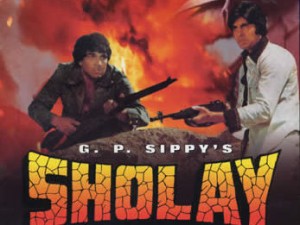 NEW YORK: Ramesh Sippy’s action thriller ‘Sholay’ (1975) has been voted the best Bollywood film of all time according to a poll of leading experts commissioned by Time Out. Historical romance ‘Mughal-e-Azam’ (1960) took the number two spot, while ‘Mother India’ (1957) (Oscar-nominated for Best Foreign Language Film) came in third.

Time Out chose 30 Bollywood cinema experts, from the UK, US and India, and asked them to rank their top ten Bollywood films of all time to determine the definitive top 100. The result is an eclectic mix, with family drama, romance and action-packed thrillers dominating the top ten.

Top ten Bollywood films as chosen by the experts:

Top acting talent includes the three Khans, Shah Rukh, Salman and Aamir, who rule the box office and have conquered their own specialist genres: Salman for comedy-action films like the 2012 hit ‘Ek Tha Tiger’ (36), Shah Rukh for emotional tear-jerkers like the 1997 romance ‘Dil To Pagal Hai’ (21), and Aamir for wholesome, funny films such as the 2009 hit ‘3 Idiots’ (13).

The Indian indie and art-house scene is also booming with some exciting contemporary offerings making it into the top 100. 2013’s ‘The Lunchbox’, in at number 43, is a restrained romance about lost souls connecting in Mumbai via hand-delivered lunch-boxes that shows a thoroughly modern approach to the traditional love story.

Dave Calhoun, Time Out Global Film Editor commented: ‘It’s an exciting time for Bollywood, due to India’s changing demographic. With 65 per cent of India’s 1.3 billion population now under 25 and city populations rapidly growing, the song-and-dance film is on the wane and films reflecting urban middle-class lifestyles and anxieties – films like 2013’s ‘The Lunchbox’ – are on the up. That said, the 1960s and 1970s classics that first drew mass audiences to Bollywood have risen to the top of our list, showing how loved these films still are. There’s still plenty of space in popular Hindi cinema for the epic songs, drama, dance, action and romance that have defined the international image of Bollywood.’

Founded in 1968 in London by Tony Elliott, Time Out has since grown into a global media group that spans 85 cities across 37 countries with a monthly combined audience of over 39 million.