Sunil Jacob not only took my children but all my finances, my belongings: Bindu Philips 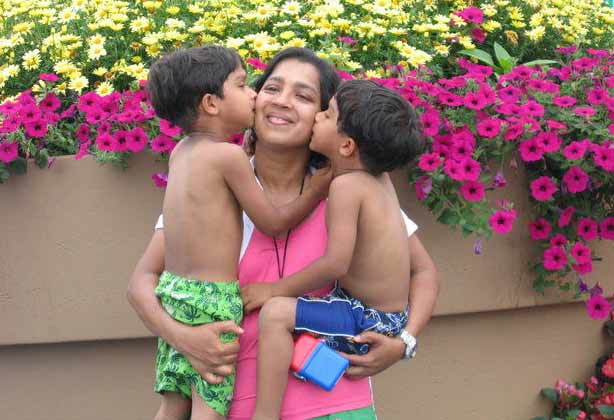 Interview with Philips, whose twin sons were abducted in India.

WASHINGTON, DC: At the very end of 2008, Bindu Philips’s now ex-husband, Sunil Jacob, abducted their twin sons Alfred and Albert while the family was visiting India on what they believed to be a vacation.

Since then, Jacob has been on a continuous mission to obstruct Philips from communicating with her children, now aged 13, in any way, shape, or form despite numerous orders from courts in New Jersey and Kerala, prohibiting him from doing so.

Not one to shrink away from the high-stakes involved in her case, Philips was one of several “left-behind” parents who testified at a March 25 congressional hearing regarding the implementation of the Sean and David Goldman International Child Abduction Prevention and Return Act, which was signed into law by President Barack Obama in August 2014 and was inspired by a father who was reunited with his son after the latter was held in Brazil by his mother for more than half a decade.

The federal law requires the Secretary of State to submit to Congress an annual report on which nations are noncompliant in cases of child abduction. The legislation also allows sanctions to be imposed against countries that persistently fail to follow either the Hague Abduction Conventions — a 1980 international treaty that forbids parents from fleeing to other countries until custody is decided — or similar agreements the United States has with countries that are not part of that treaty, according to Asbury Park Press.

“The Goldman Act works to right the terrible wrong of international child abduction, end the enormous pain and suffering endured by separated children and parents and force the federal government to act to bring abducted children home,” said U.S. Rep. Chris Smith (R-N.J.) who sponsored the bill. “Left-behind parents will now have tangible support and backing from their federal government.”

Philips is now even more hopeful that she is one step closer to regaining the children she’s missed so dearly for more than six years.

Philips spoke with The American Bazaar over the phone and answered some questions regarding her children’s abduction case; how it has affected her family, and what she hopes the Goldman Act will accomplish.

The New Jersey Superior Court awarded you sole legal and residential custody of your children in December 2009. What responses have you been met with when contacting Indian authorities regarding their return?

I had submitted the U.S. court order to the Supreme Court of India that granted me full custody of my children in December 2009 and it is still pending before them. The U.S. court order was also served to Jacob through the Ministry of Law and Justice in Delhi, India.

The last hearing was on April 2nd, 2013 and so now I’m waiting for them to give me justice.

Why do Indian courts have authority over your American-born children?

I really do not know. The children were born and lived their whole life in New Jersey prior to the abduction. They stopped me from communicating with my children, and when I was unable to communicate with them, I returned to the United States immediately and filed for custody. After I filed in the U.S., Jacob filed for custody in the Indian courts only having been there for four months after originally gone for vacation, and he claimed they had jurisdiction. But both the Superior Court and the Higher Appellate Court of New Jersey confirmed that U.S. courts do have jurisdiction over my children.

What does the “Sean and David Goldman Child Abduction Prevention and Return Act” mean for you and your children?

The act instructs the State Department to take serious action when a case is coming for over one year. In my children’s case, it’s been pending for more than six years, so the State Department can apply Section 201 which is high level diplomacy and extradition, so I’m waiting for them to enforce the Goldman Act as soon as possible.

When you say as soon as possible, what sort of timeframe might you be looking at?

I hope within the next few months.

And what level of progress are you hoping for over the next few months?

I know [Ambassador] Susan Jacobs [Special Advisor for Children’s Issues, Bureau of Consular Affairs at the U.S. State Department] is traveling to India in May and she’s going to bring up my case. So hopefully they’ll be able to extradite my children and bring them back to me.

What will it take for India to acknowledge the Act as something more than a paper tiger?

I hope and trust that the authorities from the U.S. will explain to the authorities in India about my child abduction case and about the violation of basic human rights of left-behind parents and their children.

What sort of contact do you have with your children?

Jacob has taken these six years to try and turn my children against me, so he’s limited the contact I’ve had with them. After he admitted them to a school in Kerala without my knowledge, the principal of that school later gave me permission to talk to my children twice a week at school. As soon as he heard about that he moved them to another school where he gave strict instructions telling them not to allow their mother or maternal relatives to contact the children.

There are two 2009 court orders from the New Jersey court that I state I could be able to communicate with and have access to my children via Skype. The New Jersey court said that if I wasn’t allowed to speak with my children they run the risk of being alienated from me. But Jacob was in contempt of those court orders as well. He was also in contempt of the High Court of Kerala order that allowed me to talk to the children on the weekends.

The last time I saw my children was in May of 2012 when I got about 15 minutes with them at the Supreme Court in India.

How drastically have your efforts to be reunited with your children affected you financially? Emotionally?

Jacob not only took my children but all my finances, including my salary from our joint earnings and all of my belongings — my house was empty when I returned to the U.S. He had everything taken while I was gone.

My parents had to send me finances for my living expenses and my neighbor was kind enough to allow me to stay in her house since mine was completely empty — everything had been shipped away without my knowledge by three of his friends.

But I found a new job, moved into an apartment, and got my own car and I’ve been using my current earnings to seek justice for my children.

Emotionally, it was very terrible. In the beginning, I had never spent a single day away from my children, and it was just incredibly painful.

Now though, I keep myself emotionally strong because I know there are so many good people in India and the U.S. who are trying to help me unite with my children. I just have to be strong and work hard to get my children back.

What other avenues do you have? What others have you tried?

You encountered a number of other “left-behind” parents during the congressional hearing on March 25. Did meeting them have any effect on your resolve? Otherwise?

The other left-behind parents and myself are waiting for the U.S. and [foreign] authorities to help us with our children. We compared our cases and this is international. It’s not something we can do alone. We need governments to help us.

What is the next step for you?

Right now I’m waiting for the State Department to apply Section 201 high level diplomacy to the extradition of my children as soon as possible.

I’ll never give up on my children. I will do my best to be reunited with them. I’m not going to stop until I get my children back.

I want to thank the Plainsboro authorities for their help in investigating my children’s case, the FBI, Susan Jacobs, and of course Congressman Chris Smith, who has been a champion for the cause of returning internationally abducted children.