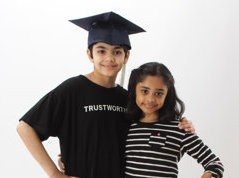 Eleven-year-old Tanishq Abraham of Sacramento, California, graduated from American River College in Sacramento on May 20. He graduated with three associate degrees: in math and physical science, general science and foreign language studies.

According to the local NBC affiliate, he was “the youngest this year to graduate from a Sacramento college with three degrees,” and possibly the youngest in River College’s 60-year-history.

However, the overachiever underplayed his accomplishment, telling the news organization that it wasn’t “much of a big thing for me.” Abraham walked across the stage wearing a “rainbow-colored scarf knit by his 82-year-old grandmother and decked-out cap with reference to ‘Toy Story’s’ mantra ‘To Infinity and Beyond,’” the NBC report said.

Earlier this year, the child prodigy was a contestant in the Lifetime show Child Genius, which was won by fellow Indian American Vanya Shivashankar. Abraham was placed seventh overall.

He was also featured in the premier episode of the PRODIGIES show, by THNKR.

Abraham, who was born in Sacramento on June 18, 2003, to veterinary Dr. Taji Abraham and software engineer Bijou Abraham, told the American Bazaar in a February interview that he wants to be the president of the United States. His professional goal is become a doctor or medical researcher, he said in the interivew.

Indian American boy graduates from college at the age of 10

Abraham’s parents, who immigrated from Kerala, India, had known early on Abraham was special. Having been bored of “regular school,” Abraham was homeschooled and was already taking college classes at the age of seven. By the time he was 10 he had already graduated high school with a 4.0 GPA.

Abraham was also one of the youngest members of the high IQ Society of Mensa, scoring in the 99.9th percentile.

Abraham’s younger sister, Tiara Abraham, is also incredibly gifted. An avid singer, she, too, joined the Mensa Society at the age of four, just like her brother, making the two the youngest siblings to join the honors society. Tiara scored in the 99th percentile on the test.

Abraham has had his fair share of fame, appearing in local, national and international news and media, such as on CNN, ABC, FOX, MSNBC and the Huffington post.