BENGALURU: Prime Minister Narendra Modi may be a political hero and champion in India, and vastly popular on social media, but he is apparently a notorious figure for Google. Modi is listed by Google’s algorithm in the top tier of “Top 10 Criminals” globally.

A search for the ‘Top 10 Criminals’ on Google brought up Modi in that list, to the shock of an Indian woman who did the search, and then, thereafter, tweeted the result. Modi has been ranked with such notorious figures as the mafia honcho Al Capone and the terrorist mastermind behind the 1993 Mumbai blasts Dawood Ibrahim.

The other popular Indians who came up in the search result for ‘Top 10 Criminals’ include Delhi Chief Minister Arvind Kejriwal, Bollywood star Sanjay Dutt and Supreme Court lawyer Ram Jethmalani.
Google was informed about the search result and soon the company issued an apology saying “We apologise for any confusion or misunderstanding this has caused.”

Later, a Google spokesperson clarified further, saying: “These results trouble us and are not reflective of the opinions of Google. Sometimes, the way images are described on the internet can yield surprising results to specific queries.”

Even though Google put up a disclaimer for the particular keyword search which reads, “These results don’t reflect Google’s opinion or our beliefs; our algorithms automatically matched the query to web pages with these images,” a search by The American Bazaar found that Modi is currently Ranked No.1 in the Google’s list of Top 10 criminals. 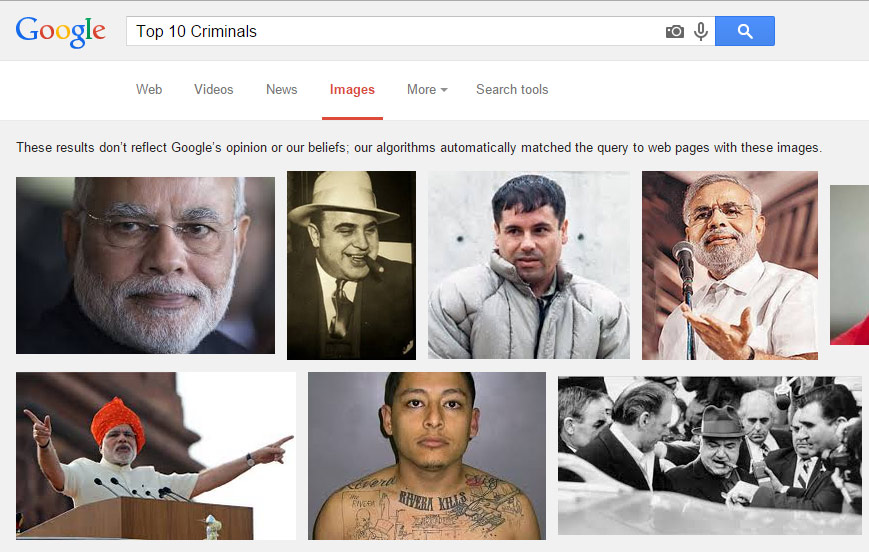 This is largely because of how Google’s most secure algorithm works. As more people type the same keyword and click on Modi’s image, the chances are high that he will remain on top of the list until Google is forced to make a change.

Google detect images through the meta description associated added by the author. In this particular case, a string of meta keywords used by The Telegraph has put Modi on the top of the criminal list.

Apart from the metadata, Google also considers 200 other factors to determine search engine ranking. The Telegraph being one of the most read and most linked online newspapers with a Google Rank of 8/10, was considered authentic source by Google’s algorithm to include Modi in the list of Top 10 Criminals.

The American Bazaar did a similar search on Bing and DuckDuckGo, but the results didn’t have Modi on the top of the list, even though he appears towards the bottom of the search results page.