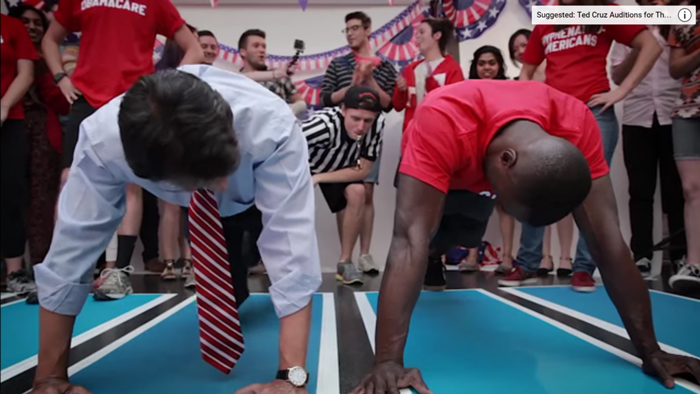 NEW YORK: Forget the ‘Presidential Height Index’ created by Gregg R. Murray and J. David Schmitz which observed that taller candidates have won 58% of US presidential contests between 1789 and 2008.

That index didn’t help former Pennsylvania Sen. Rick Santorum, at 6 feet 4 inches, to win the presidency, in 2012. If he had done so, he would have tied Abraham Lincoln for being the tallest president. Barack Obama became president again, despite being fully three inches shorter than Santorum.

For the 2016 race, it’s the size that matters, despite Santorum again making a run for it. And Donald Trump literally hair-length behind, at 6’3’.

As in New Jersey Gov. Chris Christie trying to lose weight. Admirably, so, with the help of lap-band surgery. As has former Florida Gov. Jeb Bush, who has shed an incredible 40 pounds or so, with just diet-control and exercise.

And Louisiana Gov. Bobby Jindal, who is trying to gain some weight.

Yes, afraid so. You did read that right. Jindal is the only one in this race for the White House trying to gain some dreaded pounds.

The news might be jarring for fitness fanatics, who shudder at scales at the thought of gaining a single pound.  Most might think it’s nuts of the governor who abhors being called Indian American (I didn’t dare hyphenate the two), to beef up his physique. He doesn’t have to do a Tom Hanks act.

Jindal, who proclaimed announcing his presidency that he was “tanned and ready,’ has now turned his mind to be rigorously toned too. Has decided if he can’t add any more inches to his 5’9’ height, he sure can add some girth.

But it’s been in the works for some time.

National Review noted last October that Jindal had gained some 13 pounds. In March of this year MSNBC reported Jindal downing brotein, flexing muscles in front of a mirror after a workout in a gym.

And now, just in time after being relegated to the second tier of the first official GOP debate, appears the new macho Jindal, in a new fitness freak avatar.

Jindal, going by the video below, and indeed if he keeps up this grueling regimen, might pose a stiff challenge to Paul Ryan, if and when he decides to run for president. How many toned bodies will it take for the GOP to get back into the White House?

In a video published by BuzzFeed, on Wednesday, Jindal goes in for a ‘push-up contest’ against some of the issues that confront him going into the presidential contest. Each of the ‘issue’ is represented by an individual, against whom Jindal is matched up.

Jindal, in formal wear, including a neck-tie, does really well, beats most of the contestants, but then gets ‘totaled’.

As the governor knows well, be it a 17-person race or a 2-person race, coming in second is not going to be enough, ever, to get either into the governor’s mansion or the president’s White House.

Watch the video of Jindal contesting in the push-up trials.