Alphabet, a collection of companies, to nurture Google, YouTube and many other brands. 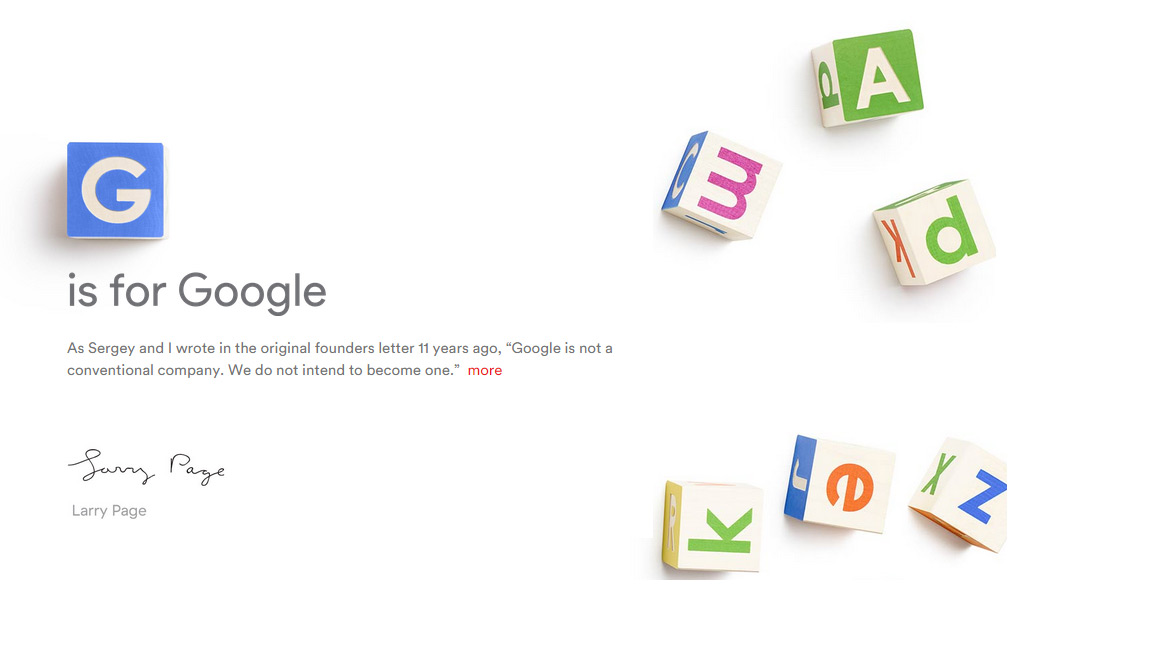 Now, this is the biggest surprise. Google will no more be Google. Yet nothing changes for the worldwide users that depend on it. The internet search giant is going to be smaller as its co-founders Larry Page and Sergey Brin have created a bigger company named Alphabet.

In an official blog post published on August 10, Page announced that “Alphabet is mostly a collection of companies”. Google and other companies will be developed as separate brands under Alphabet.

Page will be the CEO of Alphabet, while Brin will be the president. Meanwhile, a slimmed down Google will have Sundar Pichai, an Indian American, as its CEO.

Under Alphabet, G is for Google and Y is for YouTube. You can imagine the other possibilities. Now the new entity can acquire other companies and run them separately. Remember that there were talks about Google planning to acquire Twitter? Twitter can fit under Alphabet, as easily as YouTube. No surprise if Google Plus soon comes in a new Avatar.

The blog post said that “Alphabet Inc. will replace Google Inc. as the publicly-traded entity and all shares of Google will automatically convert into the same number of shares of Alphabet, with all of the same rights. Google will become a wholly-owned subsidiary of Alphabet. Our two classes of shares will continue to trade on Nasdaq as GOOGL and GOOG”.

The board has promoted Sundar Pichai, a Senior Vice President of Products at Google, as its new CEO. Being the biggest subsidiary of Alphabet, Google will maintain control over services such as Gmail, Photos, YouTube, Maps, Android, the Google Play Store, and others.

Speaking about Pichai, Page said, “I feel very fortunate to have someone as talented as he is to run the slightly slimmed down Google and this frees up time for me to continue to scale our aspirations.”

Congratulations @sundarpichai. My best wishes for the new role at @google.

Earlier, the company had difficulties in explaining how a search company develops a self-driving car or research on life sciences. Alphabet has come as an answer to all such questions. The new company can expand in an unlimited ways – it can now take up all its ambitious projects.

Google X, one of such ambitious projects, has a Life Sciences division, which is currently working on developing an early cancer detection system. There is a project called Project Wing, which aims at developing drone delivery. And there is Google Glass and urban planning initiatives and many more. Alphabet will give unlimited space for one of the most ambitious founders of our time – Brin and Page.