Chinese nationals comprised only 5%, in comparison.

New data reveals that 86% of the total H1B visas issued in 2014 for technology firms was used to hire IT professionals from India.

The data accessed by Computerworld through Right of Information Act, reveals that a lion share of visas issued for computer jobs are claimed by Indians.

On the other hand, China, which accounts for the third largest immigrant group in the US, behind Mexico and India, has used only 5% of H-1B visas for computer professionals.

According to the report published by Computerworld, Infosys – the Indian IT service provider, has 508 H-1B based employees working in the Cupertino office of Apple. Out of this, 499 or 98% of workforce are of Asian origin and the rest either white or black.

The report also says that similar circumstance exist in the office of Aetna in Hartford, Conn., the second largest company to employee workers hired by Infosys. 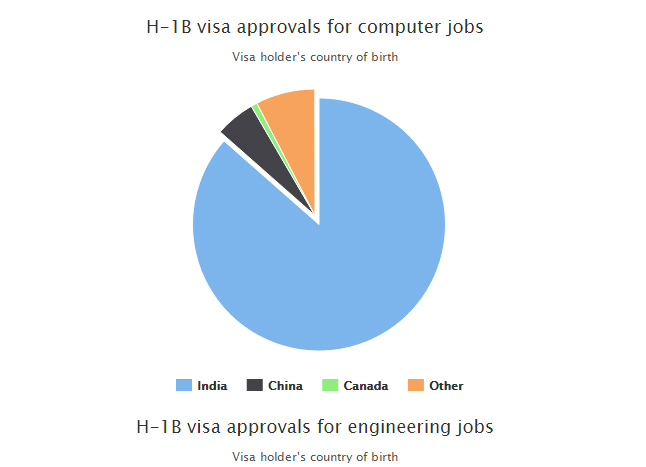 The new report comes in the backdrop of heated discussions regarding outsourcing and H-1B visa program; whether they are good or bad for the country.

The hardliners who oppose H-1B visa program are of the opinion that it is just to help US firms to bring in cheap workforce, mostly from India, leaving American citizens in the cold.

The argument raised by H1B visa supporters is that the country is not producing enough skilled work force for doing competitive IT jobs and this makes it inevitable for companies to hire skilled workers from India.

Lindsay Lowell, director of policy studies at Georgetown University’s Institute for the Study of International Migration was quoted by Computerworld saying, “Offshore companies that provide IT services prefer young H-1B programmers because the visa offers control over this contracted short-term workforce, it permits them to pay less than they would for experienced natives and they cultivate programmers who can better serve their clients after returning home to India”

The United States Citizenship and Immigration Services (USCIS) float 65,000 H-1B visas each year for companies to bring skilled workers from foreign countries in order to fulfil job necessities in IT and non-IT fields. In addition to this, 20,000 more H-1B visas are allotted for foreign students who are pursuing studies in the United States.

According to US laws, it is not necessary for companies nor the outsourced firm to divulge details regarding the number of people hired on the basis of ethnicity or country. Due to this, there is no data on the same, on the number of people employed by India firms such as Infosys, TCS and Wipro.

Even though these companies are saying that they are increasing local hiring every year, there is no specific numbers that can validate it.

Some critics of the H1B program, especially the ones who got laid off due to the surge of offshore workforce, have sued Indian companies accusing them of partisan attitude towards locals.

Steven Heldt, a former employee of Mumbai-based Tata Consultancy Services Ltd. (TCS) of discriminating against “individuals who are not South Asian” and has consequently launched a lawsuit against the multinational outsourcing giant.

Infosys, which is one of India’s largest IT services provider based in Bangalore, had rubbished a harassment lawsuit brought out by a former employee, Jack Palmer, in a district court in New Jersey, terming it as being “without any legal merit.”