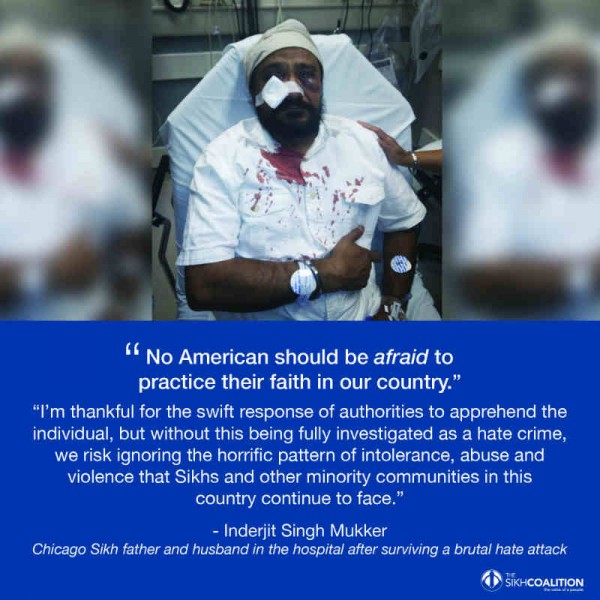 A routine trip to the grocery store warped into a nightmarish ordeal for Indian American Inderjit Singh Mukker, a turbaned Sikh, after he was brutally assaulted on Tuesday evening in Darien, Illinois.

“We believe Mr. Mukker was targeted and assaulted because of his Sikh religious appearance, race or national origin,” said Harsimran Kaur, Legal Director for the Sikh Coalition and spokesperson for the Mukker family.

Kaur informed NBC News that 59-year-old Mukker, a U.S. citizen, was looking to turn when the driver of the car next to him started yelling obscenities and racial slurs, including “Bin Laden,” “Terrorist,” “Go back to your country,” and “Why are you driving that small Prius, I’ve got a big SUV.”

After the light turned green, the other driver continued to drive aggressively. When Mukker pulled over to let the other car pass, the other driver instead stopped in front of him, exited his vehicle, and began repeatedly punching Mukker in the face through the open car window until Mukker lost consciousness for 10 or 15 minutes.

NBC reported that Mukker was rushed to a hospital after passersby called the authorities, where he was treated a fractured cheekbone, a laceration to his cheek which required six stitches, a black eye, bruising, and swelling.

Darien Police Chief Ernest Brown confirmed that the police department was considering the attack a hate crime, that a suspect had been identified, although no charges had yet been filed, and that the suspect was in the hospital for unknown reasons.

“No American should be afraid to practice their faith in our country,” said Mukker in a press release. “I’m thankful for the swift response of authorities to apprehend the individual, but without this being fully investigated as a hate crime, we risk ignoring the horrific pattern of intolerance, abuse and violence that Sikhs and other minority communities in this country continue to face.”

According to a 2009 Sikh Coalition report, 41 percent of Sikhs surveyed in New York City had been called derogatory names, such as “Osama bin Laden” or “terrorist.” According to the same report, 9 percent of Sikh adults have been physically assaulted since 9/11 because of their religious identity.

The attack is the latest in a long string of violent attacks against Sikhs in a post-9/11 United States. While 2015 marks the first time hate crimes against Sikh, Hindu, and Arab Americans were tracked by the federal government, the Sikh Coalition has kept its own records for a number of years. In just the months following the attacks of Sept. 11, more than 300 incidences of hate crimes against Sikhs were reported, according to the national organization.

Some of the notable hate crimes against Sikh Americans since Sept. 11, 2001 include: