Nikita Patel’s partner was earlier deported back to India.

Nikita Patel, the Indian national who was arrested by the Leonia police along with her partner Akash Satish Patel in the $170,000 IRS phone scam was sentenced on Friday to the time served in exchange for a guilty plea and an assurance that she will co-operate with the prosecutors.

Even though Patel’s lawyer tried to convince the court that she would like to stay back in the US and complete her schooling, the United States Citizenship and Immigration Services (USCIS) has put her as a deportation detainer with an expired visa. Now Patel will have to spend her time before deportation in Bergen County jail.

Brian Lynch, the Assistant Bergen County Prosecutor said that he will see to it that Nikita Patel is sent back to India for having overstayed in the US with an expired visa.

Akash Satish Patel, the co-accused in the IRS phone scam case was earlier deported back to India.

Both Patel’s are not related to each other but ran a phone scam targeting people with past IRS problems.

Detective Michael Jennings, who made the arrest, worked with MoneyGram, getting tipped off whenever Akash Patel made a transaction.

According to the Fort Lee Daily Voice:

Contacting MoneyGram, he discovered that a “Vincent Arora” conducted 30 or so transactions in a week in various statewide locations…

Police have seized more than $150,000 from the duo, who are not related. They are both charged with conspiracy to commit theft by deception. The manager gave him a description of the thieves and a license plate number. 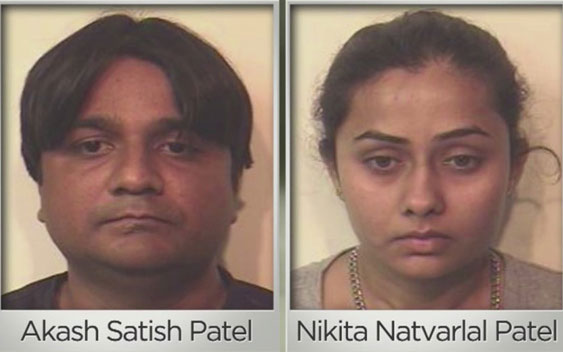 The authorities believe that the Patel’s were mere runners and the ringleader is yet to be identified. They have also confirmed that the Patels got the details of the victims from call centers based in India.

The American Bazaar had earlier reported that more than 3,000 individuals have fallen prey to the hoax, in which the scammers intimidate their victims with the notion of serving jail time if their demands are not met.

According to Timothy Camus, a Treasury deputy inspector general for tax administration, the con artists have gleaned a total of $15.5 million from their unwitting marks. One victim reportedly lost more than $500,000.

Similar scams have also targeted professionals on H1-B visas, especially, with fake agents claiming to be from the Department of Homeland Security demanding money to fix paperwork. The victims are threatened with deportation if they don’t comply with the demands.

Earlier on Saturday, Fox News reported that an unknown person has been leaving threat voicemail messages pretending to be an agent from IRS. The anonymous caller leaves a threatening message that says “Ignoring this will be an intentional attempt to avoid initial appearance before a Magistrate Judge.” The channel also reported that this could be a scam to capitalize on other people’s fund as the the tax sessions are on doorsteps.

IRS fake call recorded and uploaded by a Youtuber.