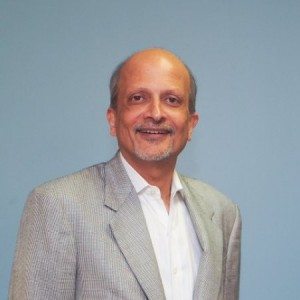 WASHINGTON, DC: Indian American entrepreneur and philanthropist Madhavan “MR” Rangaswami, who is the founder of Indiaspora, was felicitated with the inaugural Asians in America Award on Thursday.

Rangaswami and Chinese American philanthropist and shipping magnate Dr. James S. C. Chao were honored by the US-China Education Trust for their efforts to strengthen the US-China-India trilateral relationship.

The awards were presented at the Asians in America Awards Dinner in Washington, DC, on March 17, which celebrated “Asian achievements in American society, highlighting the significance of the US-China-India trilateral relationship and recognizing the importance of Asia.”

In his acceptance speech, Rangaswami underlined on the need of “giving back” to the society, which he said is the most gratifying thing in life.

“Giving back is where I enjoy the most,” he said, adding that the other thing is to connect people without expecting anything back. “The small but powerful Indian American community can collectively achieve a lot,” he said.

Rangaswami had organized the first Indian American presidential inaugural ball in January 2013 before the second swearing-in of President Barack Obama.

He and his team have started preparation for the second Indian American ball for the next president, which is set for January 18, 2017.

In 1997, Rangaswami co-founded the Sand Hill Group based in Silicon Valley. Sand Hill was one of the earliest software “angel investing” firms. Forbes has recognized him on its “Midas” list of investors.

In 2007, he established a new venture called Corporate Eco-Forum by invitation-only membership, an organization for Global 500 companies that demonstrate a serious commitment to the environment as a business strategy.

Introducing Rangaswami, Islam highlighted a number of “things that demonstrate MR’s mastery and commitment to change – both in the areas in which he gets involved and engaged and in the roles he plays.”

“[Rangaswami] was not born an entrepreneur or with a silver spoon in his mouth,” Islam said. “He developed those skills and achieved his success the old-fashioned way – he earned it.”

Describing the Indiaspora founder as “a difference maker,” the “master of all trades, and a man for all seasons,” Islam said he can “think of no-one more deserving of this honor.”

James Chao could not make it to the award ceremony, and his award was accepted by his daughter, Elaine Chao.

One of the highlights of the evening was a “diplomatic conversation” between former US ambassadors Nicholas Platt and Thomas Pickering. The discussion was moderated by Indian American Ashley J. Tellis, a senior associate at the Carnegie Endowment for International Peace.

The Asians in America Dinner, held at the historic Mayflower Hotel, was attended by a number of prominent guests, including Senate Majority Leader Mitch McConnell and Deputy Chief of Mission at the Embassy of India in Washington Taranjit Singh Sandhu.