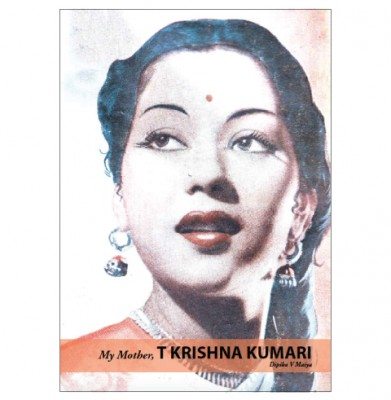 BENGALURU: My Mother, T Krishna Kumari, a book by Dipika V Maiya (275 pages; Rs. 3000 plus shipping); is now available at http://www.maiyapublishing.com, and on Amazon.com for $55.

T Krishna Kumari was the classic Indian beauty. With a flawless skin, large expressive eyes, full lips, thick long jet black hair, and a curvaceous figure, Kumari was the heartthrob of millions. She landed her first film role when a producer saw her at a cinema hall where she had come to watch a movie with her mother. She was in her early teens then. There was no looking back for this stunning woman, who the media liked to call Andhra Andala Tara, Andhra’s Beautiful Star.

She acted in over 150 Telugu films, some 30 Tamil and Kannada films with icons like NT Rama Rao, Akkineni Nageswara Rao, Shivaji Ganesan, and Dr Rajkumar. In the one and only Hindi film, Kabhi Andera, Kabhi Ujala, that she did, she acted with Ashok Kumar.

At the height of her career, she decided to give up the glamor, the arc lights and the fame to settle down on a farm on the outskirts of Bengaluru, teaching herself how to cook,  taking care of her little family of a daughter and a husband, and playing the gracious hostess to a large extended family and close friends.

Her daughter, Dipika V Maiya, has captured the life of this glamorous talented woman in a recently published book, My Mother, T Krishna Kumari.  The book brings little known facets of the actor’s life through personal anecdotes from people who know her.  For instance, the rangapravesham (first dance recital) of Tamil Nadu Chief Minister J Jayalalithaa was at Krishna Kumari’s house-warming dinner! And the yesteryears star Nutan sang playback for Krishna Kumari.

Through nostalgic old cine posters, photos from the family album and clipping from the scrap book maintained by her maternal grandmother, Dipika brings to life the woman who she knows as a mother. It is a book lovingly put together, a kind of a tribute to a heroine, who captured the hearts of the old and young alike.

You find Krishna Kumari as a baby, posing for family photos with her siblings as a little girl, modelling for Lux soap which all leading actresses did at that time, catch her with her equally famous film star sister Sowcar Janaki, find her with leading co-actors, see her getting married to Ajay Khaitan, and see immersed in family life as she enjoys breakfast with daughter, son-in-law and grandson.

The book is a rare treat for India cine lovers and chroniclers. You get to know what life was like for the actresses of that time. In the book she is quoted as saying, “Sometimes I would go for the last show with my brother. I would wear a burqah and under cover of darkness, I would watch my movies. While it was interesting to watch myself on screen, watching people’s reaction to what they saw of me on screen was something else!” she says.

And giving us a glimpse of the star status Krishna Kumari enjoyed is a quote from a relative: “It was the first time I was travelling alone, and Ajay bhaiya had given me detailed instructions on how to reach their home in Jayanagar. I got off the train and when I mentioned the name Krishna Kumari, all the auto rickshaw drivers seemed to know where she lived. I remember telling Ajay bhaiya – why did you bother with so many details? The only directions I needed were, ‘I want to go to Krishna Kumari’s house’.”

Krishna Kumari is now in her eighties. She has shared the recipes of 30 of her most popular dishes from her famous kitchen with Dipika. Among them you will find the pungent beetroot chutney, the Rajesh Khanna omelette and Burmese bhel and interesting stories behind them. And this is a real bonus!