‘HOUSEFULL 3’ brings a refreshing lightness to the series

Review: The film sticks to the conventions of the franchise. 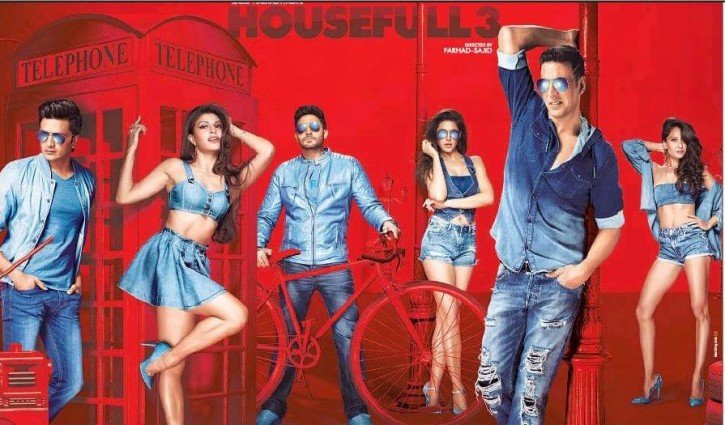 The Housefull franchise has never failed to make me laugh. Housefull 1 & 2, directed by TV host-turned-filmmaker Sajid Khan, always brought the house down with their hilarious plots involving a gaggle of crazy characters who through various circumstances all end up in one house. What follows is a series of silly events leading up to mistaken identities, mayhem, and confusion, then ending with a happy ending. I, for one, thought this was a brilliant idea and was thrilled when Housefull 3 was announced last year.

Housefull 3 was set to retain 5 original cast members from the first two movies, namely Akshay Kumar, Ritesh Deshmukh, Boman Irani, Jaqueline Fernandez, and Chunky Pandey. The new names added to the cast were announced to be Lisa Haydon and Nargis Fakhri. Perhaps the biggest change announced was that Sajid Khan would no longer direct this installment. Instead, maverick producer Sajid Nadiadwala brought in the writer duo of Farhad-Sajid (who made their directorial debut with Akshay Kumar’s hilarious Entertainment in 2014) to write and direct this film.

Although I loved Entertainment, as a fan, I was worried. Would this film retain the same style that is characteristic of the Housefull franchise? Would it still be able to cover a plot that brings something novel to the series? Fortunately, my concerns were completely unfounded.

The plot involves a rich man, Batuk Patel (Boman) who has three daughters – Ganga (Jaqueline), Jamuna (Lisa), and Saraswati (Nargis). Due to previous family tragedies involving marriage, Batuk refuses to allow his daughters to get married. When all 3 girls end up falling seriously in love with 3 men, Sandy (Akshay), Teddy (Ritesh), and Bunty (Abhishek), Batuk is furious. He enlists the help of a friend, Aakhri Pasta (Chunky), to act as an astrologer and explain to the girls the problem with marrying the men they love. When the girls and their boyfriends find a possible solution outside of the problem, everything seems to be going well. However, the release of a Don, Urja Nagre (Jackie Shroff), and 3 robbers, who all end up in this madhouse, further creates more chaos. Is everything as it seems or is everything a lie? See Housefull 3 to find out.

Performance wise, this movie belongs to no one but Akshay Kumar. He steals the entire movie with his role as Sandy. However, what is a real-scene stealer is a particular aspect of Sandy’s personality (which I will not reveal!) that will drive the audiences mad with laughter. Akshay’s body language and facial expressions during those “split” seconds are just brilliant. When you see the film, particularly pay close attention to Akshay’s outburst with Jaqueline in the bathroom, his fight with Abhishek and Ritesh, and of course, the entire climax. There is no mainstream actor in Bollywood right now who is as versatile as Akshay. This man can do everything, and I feel that for someone who has truly worked as hard as he has, he has been grossly underrated. His performance alone is worth the price of admission.

Abhishek and Ritesh act really excellently, and are undoubtedly very talented actors that I love, but seem more like supporting characters in this installment when compared to Akshay. Ritesh especially, I felt, had a larger role in the previous two films.

The girls do not have a large role in this movie, but perform well. They also look absolutely stunning in every scene, and I praise the filmmakers for taking 3 actresses that are all not Indian. It is an interesting choice that ends up working well within the plot structure of the movie.

Boman Irani also acts well, but his Batuk role was better in the previous movies. Jackie Shroff is very good as the Don, as are the three actors who portray the robbers (Nikitin Dheer, Samir Kocchar, and Arav Chowdhary). Chunky Pandey’s role is shorter this time, but we all love Aakhri Pasta whenever he shows up.

I have to comment on the music of this movie. It is simply awesome and too much fun. Best soundtrack I have heard in a while. It just makes the movie even better. Sohail Sen, Mika Singh, Sharib-Toshi, Millind Gaba, and Tanishk Bagchi deserve a huge pat on the back for their music. The best of the lot is “Pyar Ki Ma Ki” which needs to be played at parties a whole lot more. “Taang Uthake” is silly fun, whereas “Maalamaal” is a nice Punjabi number. The final song, “Fake Ishq”, sounds beautiful, but the way it is shot is even more memorable. You will know what I mean when you see the film.

The cinematography is adequate for the film, nothing too bad or too good. Just about right.

Now to the editing, script, and direction. The editing is perfect as the movie moves along at the right pace. Although initially the proceedings are slow, the film is quick to pick up and pretty relentless after that. The script is magnificent. After a long time, I saw a comedy which has some pretty interesting twists and turns which engages the audience further. Kudos to Farhad-Sajid for taking that novel and creative approach! Their direction, also, is impeccable. There is not a false note in any performance, and for a comedy, performance is key. Farhad-Sajid have now proved that not only are they amazing comedic talents, but can handle large tentpole movies as well. Superb!

One suggestion I will give for whoever makes the next installment, to shake things up a bit, why don’t they make a comedy with the same types of confusions but at a supposedly haunted house? I think that would make for a potentially hilarious and interesting entry.

Housefull 3 sticks to the conventions of the franchise that we love, while bringing a refreshing lightness to the series. It never gets overcomplicated, and keeps things just right. Keeping all of this in mind, I give Housefull 3 a 2/10…..

The most awaited Bollywood films of 2022