The festival, held September from 9 to 11 in Maryland, was adroitly organized by Manoj and Geeta Singh of Ceasar Productions. It is the only event of its kind in the Washington area that provides a platform to filmmakers, directors, artistes, and an audience engaged with independent cinema. This year was even more special as the event focused on women-centric films.

Following the panel discussion at the popular Bombay Tandoor restaurant in Tysons Corner, we queried Mehta about the relevance of the festival. How important is such an event, we asked the Canada-based director whose film Water (2005) was nominated for an Academy Award. In her customary candid, forthright, indeed refreshing, manner, Mehta replied, “I was sitting here and I looked around the room and thought to myself, this is amazing! Here I am in a place I had never heard of before. I come from Delhi and Toronto. I looked around me and I was so impressed. Everybody who is here has a desire to know something else, wants to learn something else. Whatever their reason is, they are here, to hear this young, wonderful actor (Palomi Ghosh), to hear Seema, to hear us talk. So there is a desire for change.” 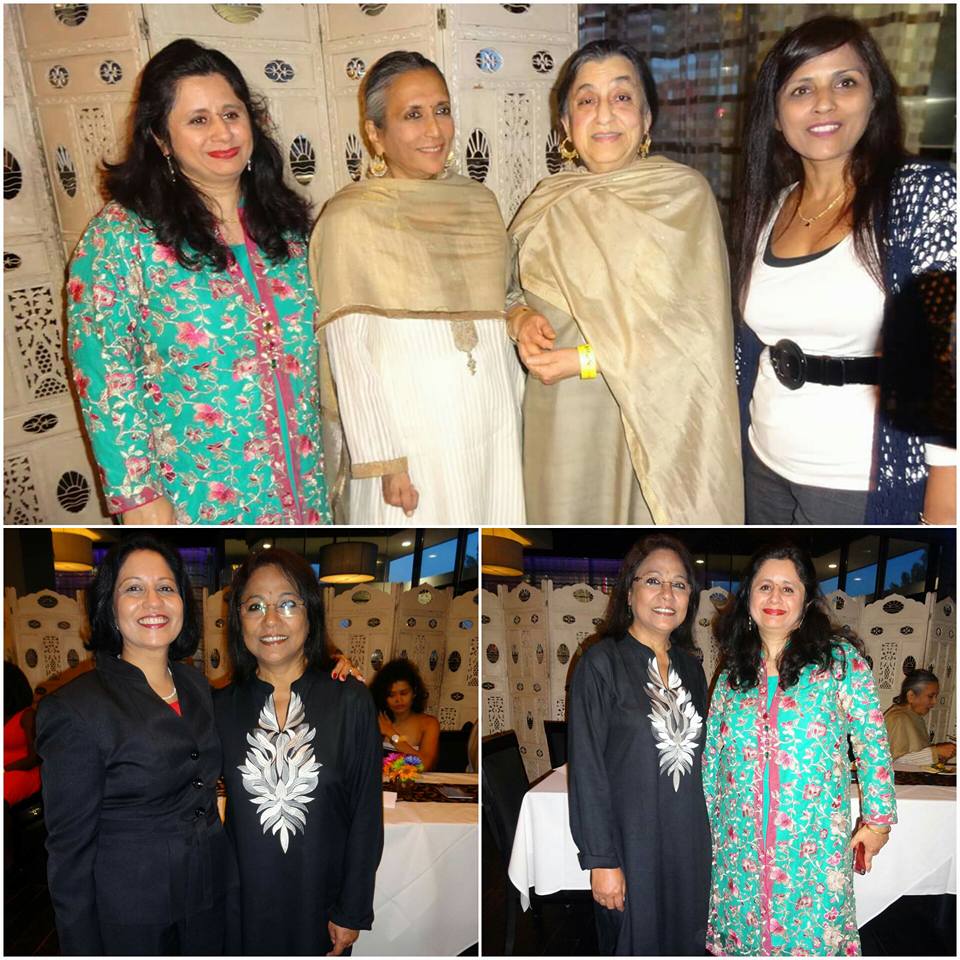 Mehta gushed, “Look at the topic! I am so impressed. It is one of the better festivals I have been to in my life, because it is life-changing. You are trying to do something that is different. You are trying to break a mold. I think it is baby steps that are so important. If our community is here for a reason, it’s fantastic! They aren’t watching some Bollywood dance performance. That’s progress. So, I’m very happy to be here,” she said.

Samtani hailed Mehta as a trailblazer, noting that her film, Fire (1996), about a homosexual (lesbian) relationship, was groundbreaking. The movie evoked strong negative reactions when it was released and the incisive moderator wanted to know if the response today would be any different.

“For me, the high point of Fire was when the film was banned, movie halls were trashed,” Mehta replied, recalling that Rivoli theater in Delhi was set ablaze. “There was a counter-protest by women holding placards that read: We are Indian and we are gay. The denial was that there are no lesbians in India,” she told the audience.

The director emphasized, “We have grown up in a patriarchal society where women don’t have a say. Would it happen today?” she asked, and replied, “I have no idea, probably not. The censor board in India is so strict. If something like this was made, I don’t know if it will be passed.”

Biswas, who won the 1996 National Film Award for Best Actress for her role as Phoolan Devi in the controversial film Bandit Queen, concurred with the censor board being very strict in India, noting that it even finds innocuous words objectionable. “Some members of the censor board are bad filmmakers, others have no sense of filmmaking,” she lamented.

The gifted actress believed that Fire and Bandit Queen were far ahead of their times, and that damaging theaters was nothing more than a publicity stunt, a lowdown means for grabbing attention.

A theater artiste, Biswas never saw herself as part of the film industry. She was shocked by the furore created after Bandit Queen was released and thought it would be her first and last film. True talent cannot be kept under wraps and she went on to act in Mehta’s film, Water, which explores the lives of widows at an ashram in Varanasi. “I am not intelligent. I just listen to my heart,” she told the audience.

In introductory remarks, Manoj Singh enthused, “We are honored to have director Deepa Mehta. She is the pride of India and Canada.” About Biswas, he disclosed that she is Mehta’s “favorite actress,” and three of her films will be screening at DCSAFF: Sold, a heart-wrenching expose of child trafficking; Force of Destiny; and Holding Back.

These are fabulous films which deserve more than a fighting chance – at the box-office, festivals, anywhere they can be viewed!

“We believe in giving back,” Manoj Singh told the audience. “We support local organizations that are doing a wonderful job. This year, we are supporting Asha for Women,” he said, which is a voluntary organization that works with survivors of domestic violence: women and children. It was startling to discover that the organization receives some 300 cases each year.

During the course of the discussion, Samtani spoke of the importance of “Changing the mindset of boys and men from the beginning — from home to what you watch on television to what you see in film. What is the mom teaching the boy?” she asked. “Is using star power the way to create social change,” she pressed on, citing the examples of actors Priyanka Chopra, Deepika Padukone, Aamir Khan, and Indian women athletes who won medals at the Rio Olympics.

“I think it’s so endemic. You are talking of thousands of years of indoctrination in India – that women are the weaker sex,” said Mehta.

“How do you break that indoctrination”, she wondered. “It’s a part of how we think, it’s a part of our religion,” she noted, referring to Sita and the Lakshman Rekha and how women need protection.

“It’s going to take a lot of awareness,” she told the audience. “I think it starts at home. I don’t think it depends on star power. I think it depends on mothers, how we bring up our sons. It comes down to economic power, who runs the household. I think financial independence is the most important thing for women, for their growth. Education is important for growth,” she said. 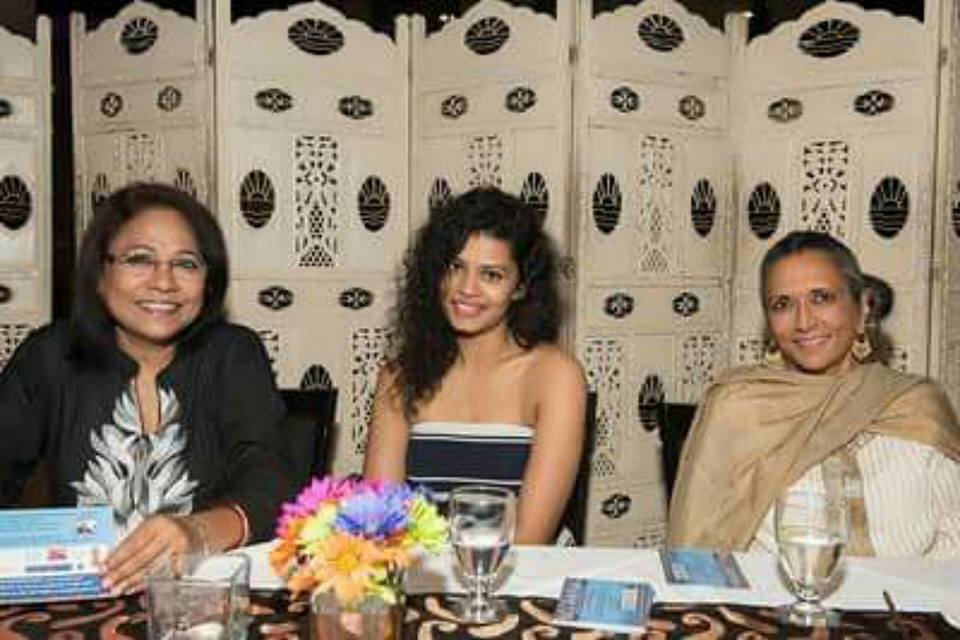 Mehta cited the example of Asha for Women as an organization taking the lead in making a difference – “Women being responsible for other women”, she noted. “We have to start taking charge,” she emphasized. “Art is responsible, it can bring social change, but not in it’s entirety because films depend on commercial success,” she reasoned.

Mehta recalled that her father was a film distributor in India and she grew up watching movies. When she expressed an interest in film-making, he told her there are two things we never know in life: when you are going to die; and how a film is going to fare.

“We keep on financing big blockbuster films which we think will do well”, Mehta told the gathering. “But, there is no guarantee. Life is about risk. Life is about commitment,” she averred, stressing it is imperative to think about the future. “If we want our children to grow up in a world that is equal, we have to make the commitment right now to help ourselves,” she said.

Samtani revealed that as an Indian-American woman, she “broke the mold in terms of getting into the (mainstream) media. I couldn’t have done it without my father,” she said.

Mehta responded, “When you say, where are the roles, it begins before that – where are the stories? Why are the stories not women-centric? Kangana Ranaut with Queen proved that a commercial film about a woman could actually break it,” she noted. “But, it’s one in a million. It happened with Bandit Queen. But, you are talking about periods of 20 years,” she bemoaned.

Samtani wanted to know, “Is it because in India, entertainment is largely for the masses, and it wouldn’t be appealing to the masses.”

“We can’t just look at India even though it is a patriarchal society,” Mehta replied. The same holds true for the United States. Commercial cinema is all men-centric.”