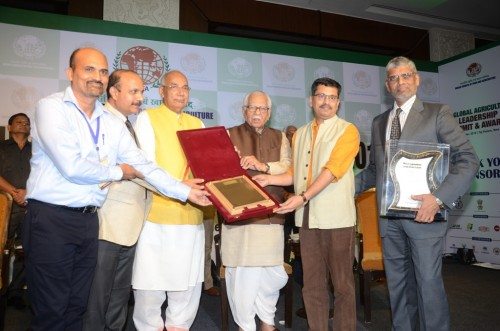 Besides livelihood generation through agriculture program, the foundation also trains youth on life skills, including tailoring, internet literacy, and paramedics. Community radio, Alfaz-e-Mewat FM 107.8, set up by the foundation, imparts knowledge on radio program production to create a pool of community broadcasters.

“We are especially grateful that our work in agriculture is now being recognized at high levels in government. We know that food security is critical to India’s burgeoning population, and Sehgal Foundation is pleased to play a part in this Herculean effort,” Dr. Sehgal told The American Bazaar.

“Over the years since we launched Sehgal Foundation in 1999, the work our team has done in partnership with rural communities has received many, many awards in areas such as water management, good governance and social justice, education, empowering women, information integrity, and community radio. From the beginning, our work in agricultural development to empower farmers has made steady strides in concert with all those other areas, but our achievements have been much harder to measure,” he added.

Indian Council of Food and Agriculture (ICFA) is the apex body to act as think tank, policy research, trade facilitation, development catalyst and monitoring center for food and agriculture sector of India and to serve as a global platform for partnerships.

The ICFA instituted the Global Agriculture Leadership Awards in the year 2008 to recognize the excellence and leadership roles played by individuals, institutions, organizations and states towards agriculture development initiatives that empower farmers.