NEW YORK: It was surreal to go listen to Sadhguru Jaggi Vasudev in the heart of Times Square, last week, at the launch of his book ‘Inner Engineering – A Yogi’s Guide to Joy’ (Spiegel & Grau; 275 pages; $25). The trepidation of being blocks away from where a bomb had gone off only days ago, planted by the terrorist Ahmad Khan Rahami, was easily dissipated looking at the myriad happy faces of tourists milling about, some of whom gleefully took in the sights stretched out in the street on pink lounges created by the artist Juergen Mayer.

It was hard, however, to reconcile to the idea of being transfixed, let joy percolate and seep senses with wonderment in two hours, listening to one man speaking in a theater. The danger of all that expected new-found wisdom and happiness evaporating in a jiffy seemed imminent before the Sadhguru even opened his mouth.

After all, one was only a few footsteps away from being engulfed once again with the mundaneness of the outside world, constrictions and responsibilities in one’s life, the rush, commute to get back home. Global strife and conflict was being discussed at the United Nations General Assembly a mile away; Donald Trump could become president of the United States. Things looked more dire than rosy. To embrace joy without any compulsions seemed a contrived emotion. 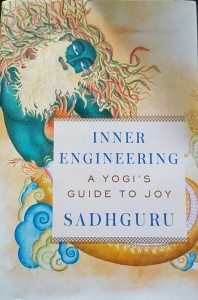 I’ve experienced the same kind of skepticism, doubts before listening to some other eminent cosmopolitan new age gurus, including Deepak Chopra and Sri Sri Ravi Shankar. I had only a vague idea of who Sadhguru really was, except for reading that he was the founder of the non-profit Isha Foundation, based in India. I half expected him to hug people in the audience, like Mata Amritanandamayi, to impart blessings.

Listening to Sadhguru, however, was indeed a joy; reading the book ‘Inner Engineering’ a pleasure.

The two hours Sadhguru spoke seemed a breeze, with a lingering regret that the play ended an act too early. Interspersed with humor and expounding real-life situations from which one could glean plenty of sagacity, the guru – who found his true calling in Chamundi Hills of Mysore in Karnataka – had one simple mantra to share with the audience, which I took away as: do more with your life as long as you are alive.
In his book, Sadhguru writes: ‘Right now your problem is that you suffer what happened ten years ago and you suffer what may happen the day after tomorrow. Both are not living truths. They are simply a play of your memory and imagination. Does this mean that in order to find peace you must annihilate your mind? Not at all.’

Time and again, in his talk, Sadhguru trivialized death with jokes, and peals of laughter, confronting, questioning the audience, interacting with them, advising to not fear the inevitable, which would befall all. In his easy-going, languid style – sitting ramrod straight in flowing robes on a couch in the middle of the stage, with his long, white beard almost looking like a mystical halo in the glare of spotlights – he espoused the value of being joyful, living life to one’s full potential.

As he explains in ‘Inner Engineering’, if one can remain blissful for 24 hours, “your intellectual capabilities can be almost doubled. Just settling the internal muddle and allowing clarity to surface can achieve this.” 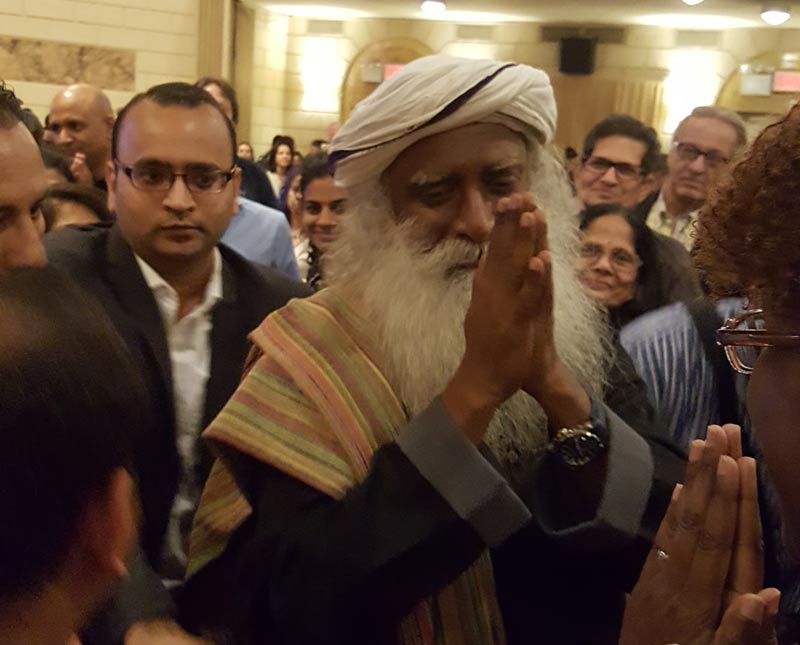 Abstinence from anger is also a central part of Sadhguru’s advice to lead a meaningful life. He says, “You only mess up your situations by getting angry. Once you see that clearly, you’ve taken that first step toward change.”

‘Inner Engineering’s also details Sadhguru’s early life, how he found salvation, realization and awareness one day sitting in the Chamundi Hills, on a break from work (he worked in the construction industry for years, became wealthy too, apart from a penchant for riding motorbikes to all parts of India). While he criticizes the contortionist and extreme forms of yoga, which is popular in America, even ridiculing it at times during his talk, he explains yoga as being in “absolute harmony” and being in “sync with yourself.”

Sadhguru, to some, may look and sound like Osho Rajneesh with his propensity for satire and humor. But fans of Baba Ramdev would not be particularly fascinated with his casual branding of yoga, though would likely find similarities in the way they both revere the body, the physical aspect of it; to stay in the tangible and not be drawn into metaphysical abstraction.

Yoga, according to Sadhguru, is “the science of creating inner situations exactly the way you want them.” Body, on the other hand, is “the most sophisticated piece of machinery on this planet.”

But teaching yoga in a studio, is contrarian and futile, need to be expounded further with a matching lifestyle, explains Sadhguru: “Just teaching the physical aspect of yoga is like having a stillborn baby. It is not only inefficient, it is like having a tragedy.”

In ‘Inner Engineering’, Sadhguru delves into many aspects of the benefits of nurturing the human body, the consumption of food, protein, combined with ‘sadhana’ (meditation), making gastronomic sense of it all. It’s a fascinating read, which Sadhguru explains, has the potential to change one’s life for the better. 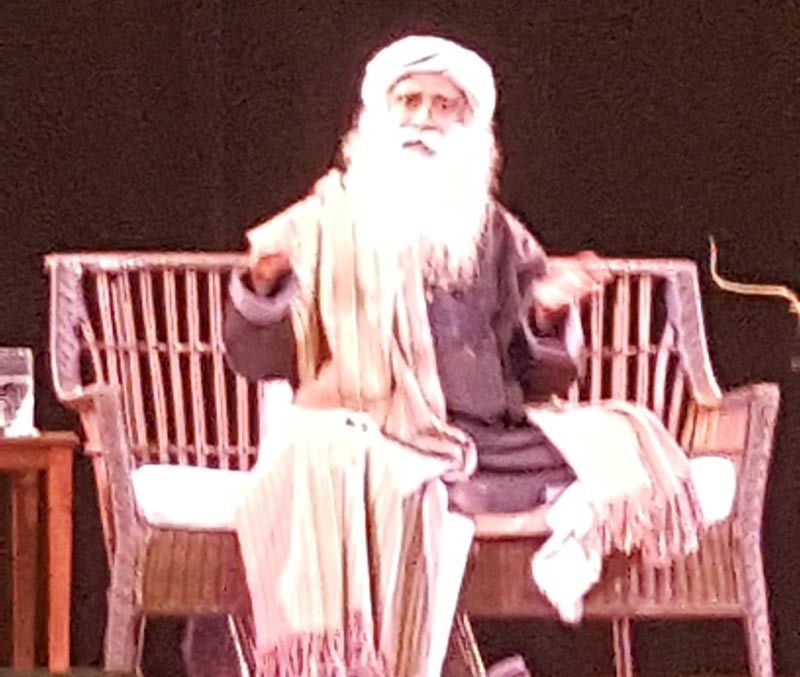 I’ll share one of Sadhguru’s jokes from his book, at the risk of raising his ire, spoiling it for future audiences; but can’t resist it. When delivered with his inimitable style, perfect timing and delivery, one can imagine the resounding laughter from the audience in the theater, which I got plenty of.

‘Once a grief-stricken man sat by a gravestone, crying bitterly and hitting his head against it. “My life! Oh, how senseless it is. My body is a worthless carcass now that you have gone. If only you had lived! If only fate had not been so cruel! If only you hadn’t left, how different my life would have been!”

A clergyman nearby overhead him and said, “I assume the person lying beneath this mound of earth was someone of great importance to you?”

“Importance? Yes, indeed!” wept the man, wailing even louder. “It was my wife’s first husband!”’

Sadhguru explains the moral of the joke as: ‘The quality of your life is always decided by how you experience life, not by what life offers you.’

The profundity of mortality, in short, according to Sadhguru, is, “If you learn how to live it, life is nothing short of a daily miracle.”

(Sujeet Rajan is Editor-in-Chief, The American Bazaar. Follow him @SujeetRajan1)