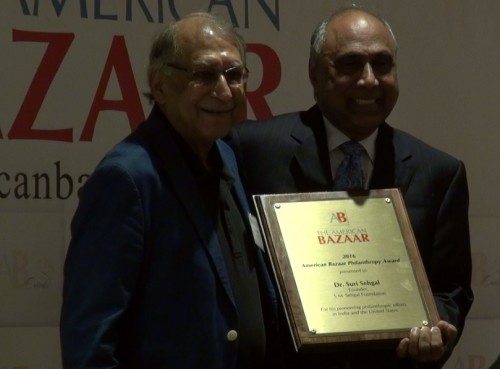 Delivering the third American Bazaar Philanthropy Lecture, here at the Washington Plaza Hotel on October 1, the founder of the SM Sehgal Foundation pointed out that roughly 27 percent of the community has a median income of $140,000. If that segment of the population committed at least $1,500 a year — which is half of the money an average American household is giving annually — about $1.8 billion will be available for philanthropy, he said.

Earlier in the evening, Sehgal received the 2016 American Bazaar Philanthropy Award. Presenting the award, entrepreneur and philanthropist Frank Islam described Sehgal, who has committed most of his wealth to philanthropy in India, as an inspirational figure. “Those in this room that are not yet initiated into philanthropy don’t need to look further for inspiration,” said Islam, a recipient of the award in 2015.

Philanthropy, like business, is about solving problems, and “What the SM Sehgal Foundation is doing in India is identifying some of the most pressing problems the country is facing and coming up with solutions for them,” Islam said. “The Sehgal Foundation is trying to solve, in its own small way, one of the greatest challenges India is facing at the moment: the disempowerment of rural India.”

The SM Sehgal Foundation, headquartered in Gurugram, a Delhi suburb in the state of Haryana, is active in around 550 Indian villages.

The 82-year-old Sehgal, who holds a PhD in Plant Genetics from Harvard University and a diploma in business management from Harvard Business School, founded the SM Sehgal Foundation in the late 1990s. He and his wife, Edda, allocated most of the money they received after selling their India-based company Proagro group of companies, to philanthropy.

Sehgal is the former president of the Des Moines, IA, -based Pioneer Overseas Corporation and vice president Pioneer Hi-Bred International.