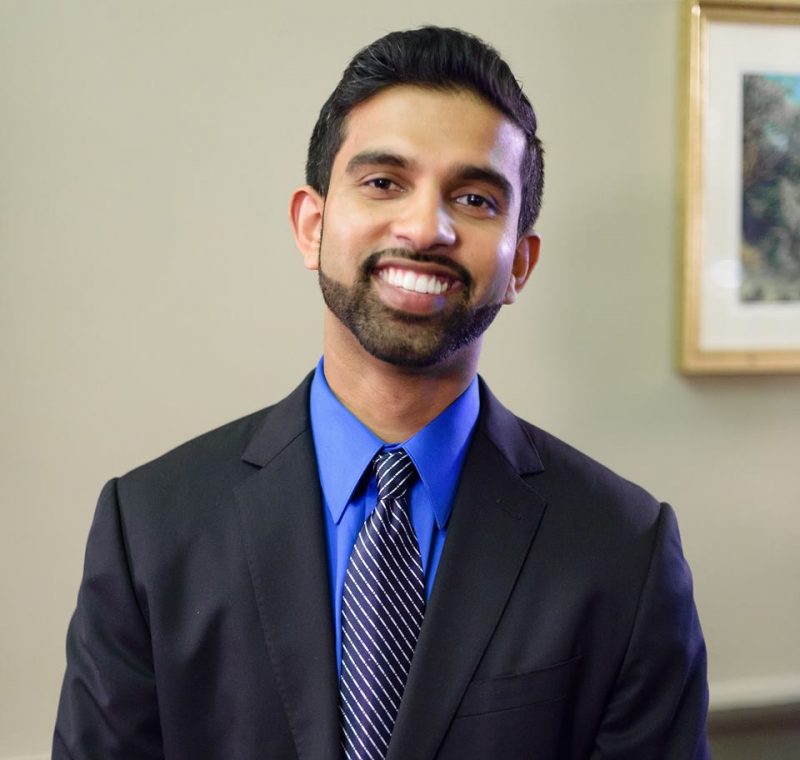 Indian American politician Peter Jacob, a Democrat, running for New Jersey’s 7th Congressional District against Republican incumbent Leonard Lance, has blamed the atmosphere of hate created by the campaign of Donald Trump for two incidents of vandalism at his home.

Jacob, who has never run for office before, said in a statement to his supporters that he woke up Monday morning to the vandalism on his house, three days after similar graffiti – bright orange swastikas – was found on his property, reported NJ Advance Media.

Two swastikas were sprayed on a back wall of the house he shares with his parents, and lawn signs promoting his candidacy were sprayed with paint, reported MyCentralJersey.com. On Friday, a swastika was painted on the sidewalk in front of his house.

Jacob blames the current atmosphere created by Donald Trump and his local opponent, who has endorsed the Republican presidential candidate, according to NJ Advance Media.

“Let there be no mistake, the people who committed this crime did so because they feel comfortable and confident to commit hateful acts due to an ever increasing atmosphere of accepted racism,” Jacob said in an email to supporters.

The first swastika sighting was reported Friday, which was found painted on the sidewalk outside Jacob’s house, according to News 12. It has since been washed away by the township.

In a statement Monday, Lance condemned the incidents. The congressman said he requested to attend a press conference called by Jacob but was not invited “due to his support of Donald Trump,” according to Lance’s campaign manager John Malone.

“While we continue to stand with Peter Jacob against racism in any form, we strongly reject his campaign’s continued false attacks against Leonard Lance and his supporters,” Malone said in an email.  “These outrageous attacks from the Jacob campaign are patently false.”

Lance joined other Republicans running for reelection Saturday, denouncing Trump’s 2005 comments about women in a statement.

“Donald Trump’s words are as offensive and vulgar today as they were 11 years ago and have no place in public or private discourse,” the statement said.

WABC reported Jacob as saying after he held a press conference, on Tuesday, “I believe hate subtracts, but love multiplies. And that’s evident by the fact that we have had so many people come out today.”

Jacob was born and raised in the Union, NJ area and is a Christian.

Jacob said his family has lived at the home for six years without incident, and he blames the vandalism on the “ever increasing atmosphere of accepted racism” in the country.

“People have asked, ‘Are you scared, do you feel any anxiety, are you worried,'” he said. “And I always respond to them, this nation has given us so much, there is nothing but love and hope in our hearts because this is our town, this is our community, this is our state. And we will not be intimidated.”

“I’m so moved that members of the community are brought together today to stand up, to say no to hate, to reject this type of bias and bigotry in our community,” the Anti-Defamation League’s Joshua Cohen said. “We have a lot of work to do if we’re going to enable our communities to be free of racism, prejudice and bigotry, but I do believe we are up for the challenge.”

Authorities say they plan to increase police patrols in the area.

MyCentralJersey.com reported that though his father is in the security business, Jacob never thought of installing surveillance cameras at his house.

“It’s definitely worrying and upsetting,” Jacob said Monday afternoon, saying he and his parents were taking the “appropriate steps” by installing surveillance cameras.

“We’ve never had any problems,” he said. “The neighbors have my signs on their lawns.”

Jacob’s father, who emigrated from India, and ran a video store before he went into the security business, went outside at midnight Sunday night and nothing was wrong.

But a little before 8 a.m. Monday, a passing neighbor saw that the signs on Jacob’s lawn had been sprayed with neon orange paint. The neighbor notified the Jacob family, who called the Union Township police.

After checking the signs, police went to the back of the house to see if there was any other vandalism and found the swastikas and an unidentified tag painted in neon orange on a wall under the deck.

Paint was also found on a doorknob, leading Jacob to believe that an attempt was made to get into the house.

On Friday morning, a neighbor walking past the house discovered a swastika painted on the sidewalk. The swastika could not be removed with soap and water, Jacob said, so the neighbor had to go to a store and buy chemicals to erase the image.

Jacob does not know why he was targeted for the vandalism.

Jacob said he believes the struggle for civil rights is continuing and the divisive tone of this year’s presidential camp may be resulting in “trickle-down hatred.”

“He (Trump) is telling America to hate again,” Jacob said.